Her opponent, Katie Hobbs (D), falsely accused her of burglary.

Republican Nominee for Governor of Georgia, Kari Lake, berated and trolled the media for either being duped by or knowingly colluding in the lie that she had been the individual who broke into the campaign office of her opponent in the gubernatorial race, incumbent Arizona Secretary of State Katie Hobbs, a Democrat.

A number of corporate media outlets immediately jumped to pin the break-in on Lake, omitting key facts in the process. One of these facts was that the break-in was committed by a homeless man with a history of burglary.

At a Thursday press conference, a reporter from CNN brought up to Lake the fact that the campaign manager for Hobbs alleged that “the [burglary] was a direct result of a concerted campaign of lies and intimidation by Lake and her allies.”

“That is absolutely absurd and are you guys buying that? “This sounds like a Jussie Smollett Part 2. So you’re going to drag the American people through something like this? Obviously you don’t want to cover the real story today, which is that I am 11 points up in the polls,” Lake said on Thursday.

“I don’t even know where her campaign office is. I’m assuming it’s in a basement somewhere because that’s where she’s been campaigning,” Lake said.

“And you guys are despicable. You drag the American people through so many BS stories like Jussie Smollett and you let a woman who’s been running a terrible campaign direct you to a story like this? You know that she’s running a bad campaign. She’s being attacked by her own party and she’s desperate. She’s trying to point the finger at me. It’s despicable,” Lake stated emphatically on Thursday.

Lake covered the topic again when she spoke to the media on Friday.

“This was the real news yesterday that none of you wanted to cover. We’re 11 points up. You’re in a frenzy because your chosen candidate is not winning,” Lake said. You didn’t want to cover this so you had to run with a completely garbage bullshit story.”

Lake also attempted to make a parody of Hobbs and her false testimony, after she joked about a break-in at her own campaign headquarters.

“The Fake News didn’t cover the incident at our campaign office,” she said.

The Fake News didn’t cover the incident at our campaign office. pic.twitter.com/7vv1sDGqnC 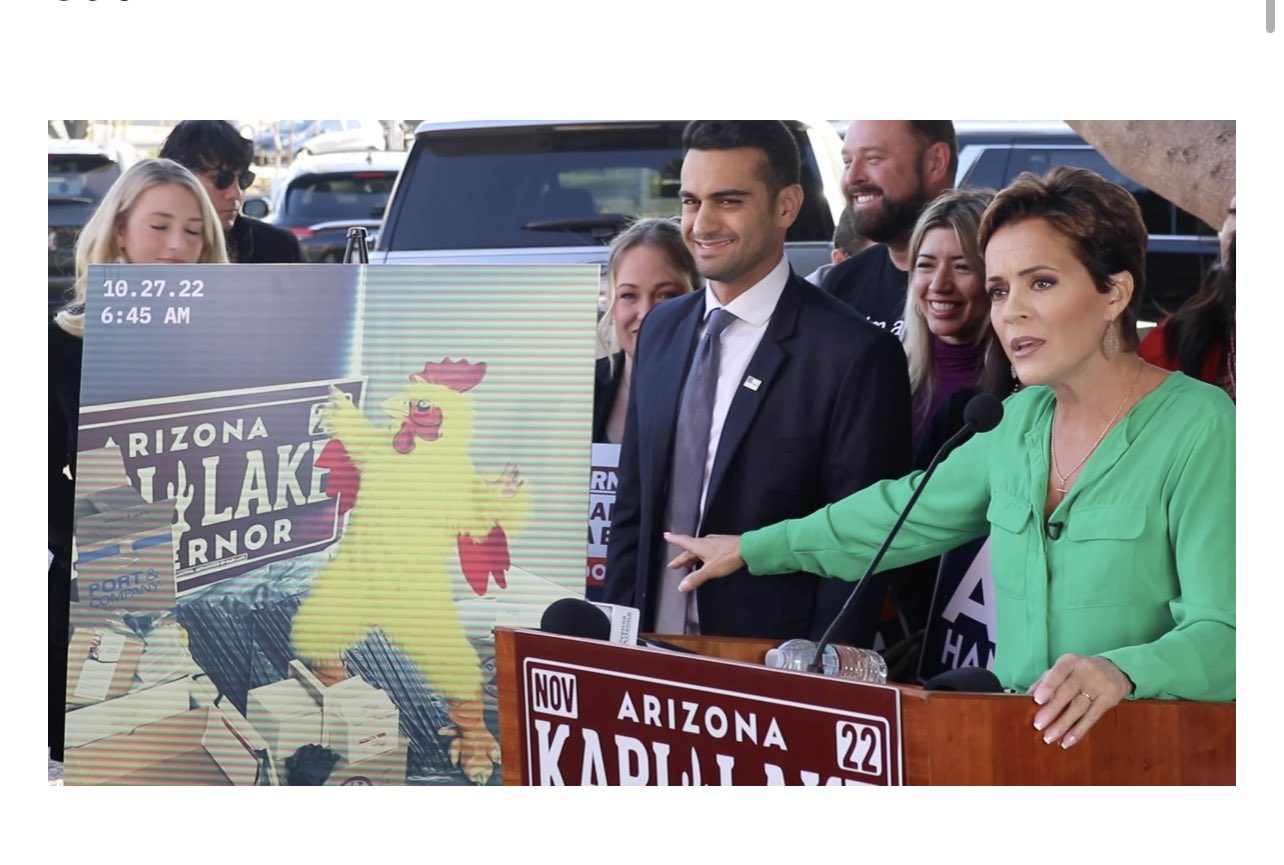 “We had an incident where somebody was rummaging in our campaign office, and I have evidence to believe it may have been Katie Hobbs herself who was involved in this,” Lake said with a straight face. “I’d like to show you that photographic evidence. I hope you’ll cover this with the same vigor that you’ve covered everything else. And we’re laughing. I know this is a joke, obviously, in case you didn’t figure it out.”

We had an “incident” at our Campaign Headquarters yesterday.

Photographic evidence suggests it was Leftist Katie Hobbs seen ruffling through our office.

A local reporter asked Lake about the meaning of the joke at a press conference on Friday.

“You spread Russia-gate bullsh** stories for three-and-a-half years and divided this country. Thank god your ratings are in the toilet, that’s where they deserve to be,” Lake stated. “Start being journalists.  Stop spreading the garbage that the Arizona Democratic Party, Katie Hobbs, and the Democrats are spreading and start doing your job.”

.@KariLake: “The media loves to run with bogus stories that hurt conservatives…start being journalists. Stop spreading the garbage that the AZ Democratic Party, Katie Hobbs, and the Democrats are spreading, and start doing your job.” pic.twitter.com/VIG7fJmHuQ

One reporter asked the frontrunner for Governor of Arizona if she was surprised that Hobbs accused her of involvement with the break-in.

“My reaction is that I am saddened that Hobbs and her camp would try to pin this on us. I read somewhere today that the Democrat Party were calling her the worst candidate in the country [sic.],” Lake said. “They said she’s running the worst campaign in the history of politics. These were Democrats saying that.”

“She’s trying to deflect her own abysmal campaign. Nobody even knows where her campaign office is,” she added.

RELATED: Kari Lake Thanks Unpopular and Outgoing Congresswoman Liz Cheney for Speaking Out Against Her