RINO Sen. John Cornyn (TX) and RINO Sen. Lisa Murkowski (AL) are jointly fundraising to help each other remain in the GOP this 2022 election cycle.

FEC data shows Cornyn’s committee has sent $288,858 to Murkowski’s Senate fundraising committee over the past 12 months. 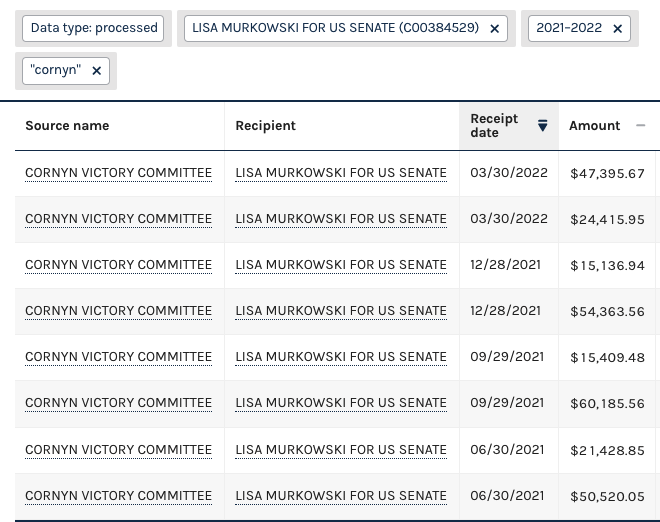 Another one of Murkowski’s RINO fundraisers is Mitt Romney and his “Friends of Mitt Joint Fundraising Committee.” This committee has helped Murkowski fundraise nearly $50,000.

Both Cornyn and Murkowski, along with 13 other Republican senators, have faced scrutiny from their party after they voted with Democrats to pass a Gun Control & Red Flag bill through the Senate. “Republicans who voted to back red flag laws are traitors to the Constitution and our country,” Rep. Matt Gaetz (R-FL) said.

After Cornyn’s gun control push, he was the subject of jeers and boos at the Texas GOP Convention earlier this month.

Chants of “No more gun control” and “Go back home” can be heard amongst the crowd while the Senator attempted to speak.

US Sen John Cornyn gets viciously booed during much of his speech here at the Republican Party of Texas Convention. Here’s his closing remarks and the cascade of boos. pic.twitter.com/m2Hua9WdrV

Cornyn reaffirmed his gun control stance after the event, saying, “I’ve never given in to mobs and I’m not starting today.”

Tucker Carlson slammed Cornyn and Murkowski, along with all the other prominent Republicans that helped advance the gun control bill.

Carlson contested that the bill would throw out due process and allow guns to be seized illegally and unconstitutionally. In addition to gun control and fundraising for Murkowski, Cornyn is reportedly planning to shift further to the Left and adopt their immigration policies in Texas.

“Has there ever been a greater more brazen sellout of any group of voters than what Republicans Senators Mitch McConnell, John Cornyn & the rest are doing right now,” asked Carlson.

Former President Trump also shamed Cornyn and the other Republican Senators who voted in favor of the gun control legislation last week. “The deal on ‘Gun Control’ currently being structured and pushed in the Senate by the Radical Left Democrats, with the help of Mitch McConnell, RINO Senator John Cornyn of Texas, and others, will go down in history as the first step in the movement to Take Your Guns Away,” Trump wrote. “Republicans, be careful what you wish for!!!”