Joe Rogan questioned the intense backlash against Kyrie Irving’s Instagram story that culminated in a lengthy suspension, $500,000 fine and numerous other requirements. Irving has not played for the Brooklyn Nets since November 1 after sharing a link to a documentary titled, Hebrews to Negroes: Wake Up Black America, which has been labeled as antisemitic. Irving has stated that he does not hold any hate or ill will towards Jewish people or any other group, but he was still branded as an antisemite and punished very harshly, prompting questions.

“Kyrie posted a link in his story to a video, and this is why he is getting in trouble. But isn’t that video for sale on Amazon?” Rogan said during a recent episode of the Joe Rogan Experience. “That’s the craziest thing ever. Kyrie is getting in trouble and Amazon’s not. Like what? You want all this from him because he watched a video and he sent a link to it that you are selling. That’s fu***ng wild.”

Kyrie Irving has never stated that he agrees with everything promoted in the video, while his only reference to it was a brief Instagram story.

“I’m also over the place when it comes to elevating my consciousness, because I didn’t get it in school. All I did [get was] seven hours of day being indoctrinated and brainwashed on a history that doesn’t belong to me or my ancestors,” Irving explained. “I was on Google and I look up my name and what it means and it’s a title given to Christ. Philippians 2:11. My name translates into the Hebrew language as Yahweh. So I went on Amazon Prime and said, ‘let me see if there are any documentaries on Yahweh.’”

After initially sharing the link to the documentary — which was streaming on Amazon Prime — Irving was criticized by Nets owner Joe Tsai in a tweet. Irving then got into a heated argument with a reporter in a post-game press conference a day later in which he went back-and-forth with an ESPN reporter who claimed that Irving’s post was inciting hatred against Jewish people, which he denied.

Days after the exchange, Irving and the team issued an apology that came with a $500,000 pledge to the Anti-Defamation League (ADL) from each. “To promote education within our community, Kyrie Irving and the Brooklyn Nets will each donate $500,000 toward causes and organizations that work to eradicate hate and intolerance in our communities,” a joint press release from Irving and the Nets stated. 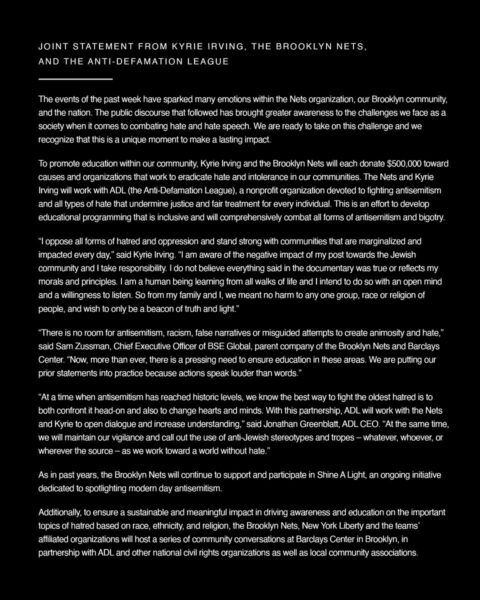 “I am aware of the negative impact of my post towards the Jewish community and I take responsibility. I do not believe everything said in the documentary was true or reflects my morals and principles. I am a human being learning from all walks of life and I intend to do so with an open mind and a willingness to listen,” Irving said. “So from my family and I, we meant no harm to any one group, race or religion of people, and wish to only be a beacon of truth and light.”

This was still not good enough, as Kyrie Irving was later suspended by the team for five games and given a lengthy list of requirements that he must complete in order to return. This includes a $500,000 donation to the ADL, the completion of antisemitism training, a formal apology, and a meeting with Nets owner Joe Tsai to “demonstrate understanding.”

Last week, Tsai met with Irving and stated that he believes him when he says he has no hatred towards Jewish people, though a timeline for his return has not been outlined. The star point-guard’s suspension has now surpassed the initial five games.

“We spent quality time to understand each other and it’s clear to me that Kyrie does not have any beliefs of hate towards Jewish people or any group,” Tsai said in reference to the meeting. “The Nets and Kyrie, together with the NBA and NBPA, are working constructively toward a process of forgiveness, healing and education.”

The Nets and Kyrie, together with the NBA and NBPA, are working constructively toward a process of forgiveness, healing and education.

In addition to the hefty team punishment, Irving lost a lucrative brand deal with Nike.