England Descends into Chaos as Roving Gangs of Muslims Dominate the Streets, Hunt Down Hindus

Former FBI Agent Speaks Out, Claims ‘They Don’t Give A S**t’ About Child Sex Abuse Cases

Staff Sergeant Joe Biggs, an Iraq and Afghanistan veteran with two Purple Hearts and a high-ranking member of the Proud Boys, wrote a harrowing letter from jail in Florida, where he is being held in pretrial lockup for protesting at the January 6 Election Integrity rally in Washington, D.C. Biggs is charged with conspiracy and other charges including entering and remaining in a restricted building. Biggs’ lawyer recently revealed in court that Biggs has been threatened within Seminole County Jail.

Here is Staff Sergeant Joe Biggs’ letter to his supporters: “Today is my 3 month anniversary being locked up. Not allowed to work out. My body feels as if it’s aged so much. Can hardly move. Walking has become very difficult. I sleep on a piece of steel welded to a wall with a thin mattress. I now have major lower back issues and shoulder pain from the “bed”.

I’ve gotten maybe 10hrs outside all together since being here. I get to go outside maybe 3 times a month. The food here is all soy based. So its weakening our bodies. Hardly any protein. Mostly processed foods and some kind of gelatin dog food looking stuff. No privacy allowed when shitting allowed. You have to be in view of everyone. Each cell has a shelf. You are not allowed to use it. Nothing can be placed on it. Lights go out at 11:45 pm and back on @ 4am for “breakfast”. Luckily the showers are only one person allowed at a time.

Every cell has a Small window that has been sand blasted so you can never see outside. Breaking any rules can result In losing ability to talk to family or a trip the hole for a few weeks where you are stripped naked a left in a bright freezing room. I have anxiety bad now. Panic attacks so bad I black out. There are actual white supremacist gang members here who hate the fact the media call proud boys white supremacist. They tested me on what it means to be one of them a I failed miserably. Good. I have a mixed baby so that automatically keeps me away from that gang life! I live amongst actual racial supremacist groups and they all say Im too nice and nothing like the media makes me out to be.

The black guys in here say if I’m any kind of representative for the PB’s then they like us and wanna be in our group. Its funny all these bad people shunned by society have taken the time to see me for me and the media won’t even try. I tend to stay to myself alone in my cell. Reading the bible and other Christian books. The plus side to this God was able to get ahold of me in this place. In the end I just pray people see the truth. I had nothing to do with that day. I never planned what happened. I was in the wrong place at the wrong time. ~Joe Biggs political prisoner aka inmate 202100002744” 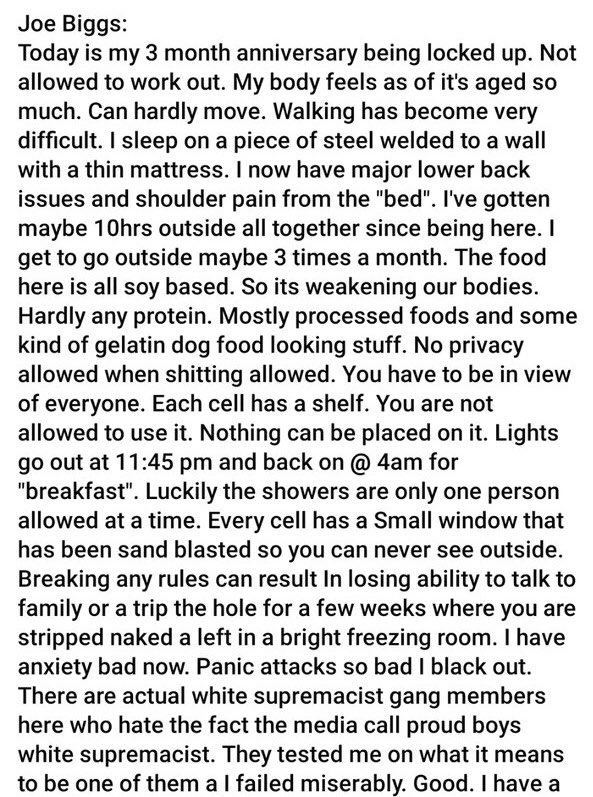 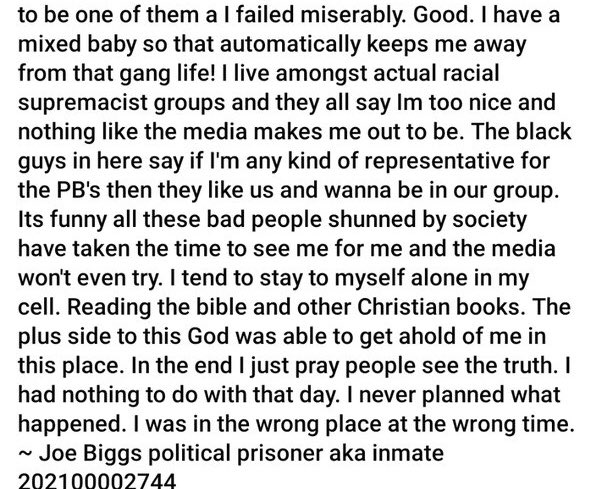 England Descends into Chaos as Roving Gangs of Muslims Dominate the Streets, Hunt Down Hindus