Television host and former Trump administration member Steve Bannon was subpoenaed to appear before the U.S. House Select committee investigating the mostly peaceful civil unrest on January 6 for a deposition today. When he did not attend, as most expected, the committee’s chair released a statement announcing they intended to hold him in contempt, with the process beginning next Tuesday.

When Bannon did not appear, with his lawyer citing concerns about President Donald Trump’s executive privilege, the Democrat chair of the committee released a statement announcing that contempt proceedings against Bannon would begin on Tuesday.  Rep. Bennie Thompson, the Democrat who chairs the committee, stated that “Bannon has declined to cooperate,” and thus, “We will convene for a business meeting Tuesday evening to vote on adopting a contempt report.”

JUST IN: Contempt proceedings against Bannon to begin Tuesday. pic.twitter.com/Q9rA5QIsdC

Less than one week ago the January 6 committee was pronounced “dead” by Rick Wilson, the founder of the anti-Trump Lincoln Project. At the time, Wilson claimed that sources informed him the committee “will not force the subpoenas” and lamented that “Trump wins” again. Instead, Democrats were eager to work on infrastructure and other items on their policy agenda.

Those who follow the anti-Trump pundit and former GOP political strategist did not seem impressed by the January 6 committee selecting next Tuesday as the date to begin the process of holding Bannon in contempt, and Wilson suggested Congress should have voted today.

Good. The house should return immediately and vote.

President Donald Trump released a statement shortly after the news broke, noting that the committee is “composed of Radical Left Democrats and a few horrible RINO Republicans” who are “looking to hold people in criminal contempt for things relative to the Protest.”

“In fact they should hold themselves in criminal contempt for cheating in the Election, making up the Fake Russia, Russia, Russia, and Ukraine, Ukraine, Ukraine Scams, the Afghanistan debacle, the Southern Border Crisis, the crashing economy, and record-setting inflation,” President Trump added. “They are using prosecutors and prosecutions to destroy more than half of this Country and the people are not going to stand for it! 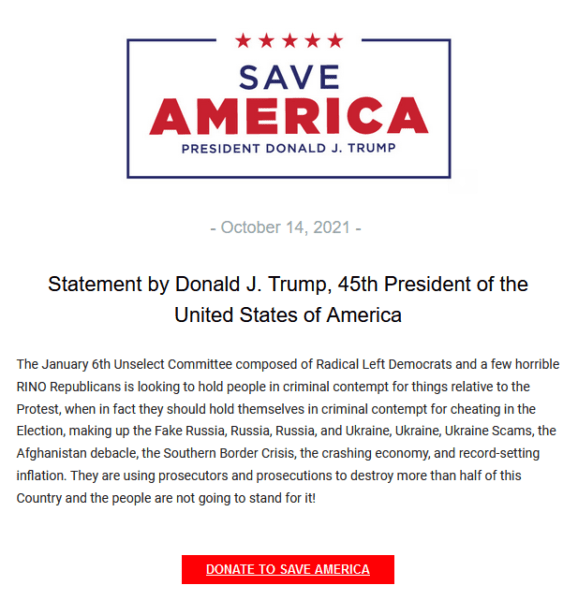