Nurse Tiffany Dover went viral last year when she passed out on live television while receiving the COVID-19 vaccine after she was selected by her hospital to receive it early. After, rumors suggesting she died circulated online, prompting statements from Dover’s family, hospital, and other officials that were then used to fact check claims of her death. The CHI Memorial Hospital in Chattanooga, Tennessee, where Dover worked, issued three tweets featuring Dover to reassure the public on December 18, 19, and 21.

However, despite the tweets and videos being referenced by many fact check articles, CHI Memorial Hospital has since deleted its tweets about Dover.

Tiffany Dover, a nurse working for CHI Memorial Hospital in Chattanooga, Tennessee, went viral last December after she collapsed on live television immediately after receiving the COVID-19 vaccine. Shortly afterwards, rumors of her death spread online. This prompted fact-checks from the New York Post, fact checking website Snopes, news agency Reuters and, more recently, the left wing publication the Daily Beast with its article in February. At press, these websites still assure readers Dover is alive and well citing public statements, including those made by CHI Memorial Hospital.

Per the Daily Beast’s February 2021 article. “There are more than 22,000 comments on her last Facebook post, from people around the world—a collective grieving and outpouring of anger for the 30-year-old mother of two. But Tiffany Dover is not dead.”

“According to all official sources, she is alive and well and working as a nurse at CHI Memorial Hospital in Chattanooga. Last week, she was pictured on the front of the local newspaper caring for a north Georgia police chief who had been in the hospital for nearly 100 days,” wrote the Daily Beast. National File was unable to find this photo of Dover, which was not published by The Daily Beast. The publication also did not name local newspaper, making verification more difficult.

One news outlet at the time attributed the fall to the vaccine. In statements, Dover told the media and the public that she had a rare reaction to pain that caused the reaction, and it was not caused by the vaccine. “I have a history of having an overactive vagal response, and so with that if I have pain from anything—hangnail or if I stub my toe—I can just pass out,” the nurse later said.

The fact-checks reference comments from family members, local government officials, and hospital employees who insist Dover is alive and well, urging skeptics to abandon their efforts. “I’m honestly disgusted with people right now,” Dover’s sister-in-law told the Daily Beast, referring to those questioning whether or not she is alive. “TIFFANY IS ALIVE AND FINE.”

Karen Long, a spokesperson for CHI Memorial who National File attempted to contact, was quoted extensively in statements assuring the public Dover was fine and a police spokesman noted that the “police department isn’t involved in this at all because there’s no crime, no death, no nothing.”

Amid all the pressure from outsiders seeking proof of life of Dover, CHI Memorial Hospital issued three tweets, as well as a video on Facebook “showing hospital staff surrounding Tiffany Dover,” thus serving as evidence that she is not dead. The tweets, posted in December have since been deleted, though some were archived here. 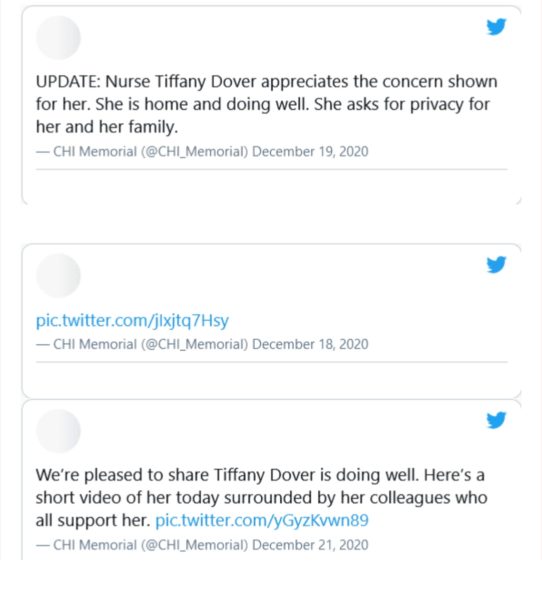 In fact, the posts were used in separate fact checks as evidence that the situation was all an anti-vaccine conspiracy, yet all the CHI Memorial posts linked are unavailable due to the deletions: “On Monday, CHI Memorial hospital released a video of Ms. Dover standing with her co-workers, accompanied by this message: We’re pleased to share Tiffany Dover is doing well. Here’s a video of her today surrounded by her colleagues who all support her.”

In one web archive of the Daily Beast fact check from February, a tweet posted by a local newsman named Josh Roe (Twitter: @joshroe) of the Facebook post was included in the article, but has also since been removed from the piece and Roe’s Twitter account. The Daily Beast fact check also states that “Facebook has hidden many search results for her name.”

Several outlets have noted that CHI Memorial made its Twitter account private at some point during the social media storm. However, no articles note that or explain why the tweets were deleted, and archive websites suggest the tweets from the hospital were still available as recently as February of this year.

Adding further confusion, various social media posts from Dover’s family members made around the time of her collapse, and likely about Dover judging by their high engagement, were at some point either made private or deleted. One post from a family member contains no caption and simply cites another fact check article from December 29, 2020.

An Instagram page that appears to belong Dover has amassed tens of thousands of followers. Of the last three posts made on the account one was last year on December 13, and two were this year on February 25 and 26 of 2021.

The February 25 post has a location set at Vail Village, Colorado, and features people skiing. One photo included in the post appears to have a filter on it, making it unclear as to whether or not the photo was taken at the same time as the rest. Another photo in the same post appears to show Dover, though a mask covers most of her face, also containing what appears to be a filter. The post is captioned “Meet me on the other side of paradise.”

National File repeatedly contacted CHI Memorial Hospital for comment regarding why the tweets assuring users of Dover’s well being were deleted and did not receive a clear response from multiple hospital officials. National File also attempted to ask whether the social media posts were removed at the request of Dover and did not receive a response.

Without prompting, this person assured National File that “nobody here has died from the vaccine,” and provided no definitive explanation for why the hospital deleted its tweets. After exploring several topics with the hospital representative, National File asked if Dover’s privacy might have been a factor, which seemed to make sense to the person who answered the phone. “It was probably for privacy,” the hospital representative agreed. “The vaccine hasn’t killed anyone.”

National File asked if this official knew someone who could provide further explanation regarding Dover’s current status with the hospital and was referred to Human Resources. At the same time, the original person who answered the phone on a Thursday afternoon during business hours warned us that nobody was there to answer the phone.

In light of this, National File made several attempts to contact CHI Memorial Hospital Marketing Specialist Karen Long, who previously spoke to other outlets to get out the facts regarding Dover’s health. Long did not reply to National File in time for publication of this article.

While National File does not endorse any theory regarding Dover’s health or well being and does not condone targeted harassment against her, the lack of transparency has raised questions.

“Hey, how about an update on Tiffany Dover,” wrote former Republican candidate for U.S. House Luke Negron. “With all the questions on vaccines, having her make a public statement could set thousands at ease & save lives,” he explained, the, noted that prior to her collapse, the hospital chose Dover as its spokesperson to receive the vaccine on camera.

Hey, how about an update on Tiffany Dover?

With all the questions around vaccines, having her make a public statement could set thousands at ease & save lives.

Please don’t give us the “she asks for privacy” BS – you chose her to be a public spokesperson. Proof could save lives