Heidi St. John Responds To ‘Completely False’ Claims She Covered Up Scandal In 2014

Heidi St. John Responds To ‘Completely False’ Claims She Covered Up Scandal In 2014

St. John says it was impossible for her to become involved, as she had no knowledge of the alleged incident

Heidi St. John, a Republican candidate for U.S. House in Washington, where she is running to replace anti-Trump incumbent Rep. Jaime Herrera, has responded to claims that she covered up an abuse scandal within the homeschool community by calling the accusations “completely false”.

“A variety of accusations have been swirling within a fringe segment of the homeschool community suggesting that I, along with other respected homeschool leaders, have been involved in a ‘scandal,’” wrote St. John. “In a series of increasingly wild allegations, I have been accused of all sorts of terrible things, including causing a homeschool vendor to be disinvited from a homeschool convention.”

“I did not request anyone be disinvited from a convention. I did not cover up a child abuse scandal. Both of these accusations are completely false,” she explained. “While the Internet provides a wonderful platform for encouragement and information, I am now learning first-hand that it can also be used to spread false information. It is a place where people of character can have their reputation attacked with little recourse.”

“Even my blog post has been used against me; proof that words written from a good heart with good intentions can be twisted by a clever wordsmith with evil intentions. God’s Word is clear: A tree is known by its fruit.”

The accusations, dating to 2014, claim that St. John’s influence was used to bar a person from attending a home school convention after St. John’s name was used in an email discussing the alleged sexual molestation of a child. St. John’s name was presented as a witness, despite St. John repeatedly informing those involved that she had no direct knowledge of the incident. A member of St. John’s campaign told National File that St. John was never a witness, and asked not to be included in the email because she had no first hand knowledge to add.

Additionally, at the time, St John had been told that law enforcement was investigating the abuse allegations.

Jenefer Igarashi alleges that her son was molested at 6-years-old by his cousin, the then-teenage son of homeschool icons Paul and Gena Suarez, who publish a popular magazine, The Old Schoolhouse. Gena Suarez is the sister of Igarashi. Igarashi says that the Suarez family first reacted with shock and horror after learning of the allegations, and says that the Suarez’s son admitted to the abuse when confronted.

Igarashi provided emails suggesting the Suarez family announced their intentions to separate themselves from The Old Schoolhouse following the alleged admission. Then, Igarashi says the Suarez family began a campaign to discredit, bully, and cancel Igarashi. Eventually, Igarashi enlisted 20 witnesses to send a letter to prominent members of their community regarding the Suarez family’s alleged history of child abuse, including the alleged molestation of Igarashi’s son, without obtaining some individuals’ permission.

In emails, St. John repeatedly asked not to be included as a witness, saying she had no first hand information regarding the alleged incident, which has been described to National File as a family feud. After learning her name was already included – without her permission – St. John again asked to be removed from the email which described alleged incidents about which she had no first hand information.

It was later alleged that Igarashi was barred from a popular homeschool convention because of her interactions with St. John. St. John says this is untrue, and that her involvement with Igarashi regarding this matter was limited to asking repeatedly not to be included in a letter describing issues of which she had no knowledge.

National File has obtained an email sent from Igarashi to St. John that indicates, in April of 2014, Igarashi acknowledged that there was “no need to involve” St. John. 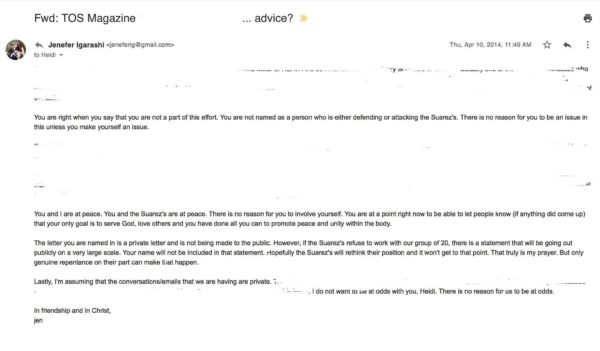