Just weeks after Glenn Youngkin was elected Governor of Virginia, conservatives are already accusing him of stabbing them in the back. His communications staff includes a skirt-wearing LGBT man who lists pronouns in his Twitter biography, and Youngkin’s transition team is led by a former Bush Administration official who is pro-Black Lives Matter.

Though Youngkin was elected during a statewide culture war as voters pushed back on the radical left’s LGBT agenda and Critical Race Theory, Joshua Marin-Mora, a member of Glenn Youngkin’s communications staff, appears to be fighting for the opposite side.

Marin-Mora lists his preferred pronouns in his Twitter biography, and even dons a skirt in photos posted online. A former Georgetown University student, openly gay Marin-Mora ran for school office in 2020 on a left-wing platform that included a Green New Deal-style partial ban on meat consumption for students. Marin-Mora also attempted to force the school to divest from fossil fuels.

As a Georgetown student, Marin-Mora was a member of the school’s Latinx Leadership Forum, a left-wing, race-based organization that supported open borders, amnesty for illegal aliens, and the violent, Marxist Black Lives Matter movement. Despite his deep and very public involvement with the radical left, Marin-Mora was hired by the Youngkin team quickly after graduating, with a Youngkin spokesman confirming that Marin-Mora had been employed there since June. 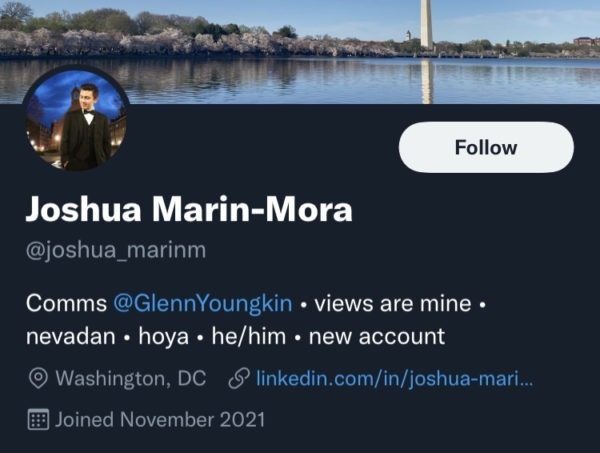 Speaking to National File, a Youngkin spokesman insists that the Governor-elect of Virginia is indeed a conservative despite the opposing political views of those he hired.

Youngkin’s communications director Matt Wolking defended the LGBT activist, and said that Marin-Mora should be celebrated for helping to “elect a conservative” in the battleground state. Wolking characterized those who question Youngkin’s decision to hire and LGBT activist as “ignorant and foolish.”

.@joshua_marinm is a valued member of our campaign’s comms team and has been for months.

He worked hard to elect a conservative as Virginia’s next governor. Attacking him for that is ignorant and foolish.

Marin-Mora is far from the only questionable hire on Glenn Youngkin’s team, with the transition to his administration being led by pro-Black Lives Matter, former George W. Bush official Kay Coles James.

James also heads up the Heritage Foundation, a group often seen as a pillar of the corporate establishment’s brand of “conservatism” which has been blamed in part by many on the populist right for helping fill key positions in President Trump’s administration with establishment GOP’ers.

In 2020, as American cities burned and American citizens were murdered by violent Black Lives Matter Communists, Kay Coles James publicly sympathized with the BLM movement, stating that she could “understand the frustration and anger” seen in the streets, before claiming that America is a racist nation.

“How many more black people must die,” James wrote after convicted violent felon George Floyd died in police custody with a lethal dose of fentanyl in his system. “And how many more times will statements of sympathy have to be issued? How many times will protests have to occur? How many more committees will have to be formed until America admits that racism is still a problem in this country?” She went on to call racism America’s “fatal wound,” seeming to suggest that the nation will be taken down sooner or later.

Youngkin’s hiring of individuals who are likely seen by many of his voters as political opponents aside, the Governor-elect has already made at least once announcement that has conservatives scratching their heads. Despite major fanfare from networks like Fox News in the aftermath of his election win, Youngkin played to the center or to the left for much of his successful campaign.

At one point, Youngkin released an ad blaming white supremacists for Virginia’s increase in crime under Democrat rule, though actual crime statistics reveal this to be wildly inaccurate. Further, a spokesman told National File that Youngkin was in support of Democrat Governor Ralph “Blackface” Northam’s removal of Confederate monuments, but added that Youngkin would not force the decision on local communities.

Before his campaign, Youngkin led the Carlyle Group, a private investment firm that offered to match donations to the anti-white, anti-Christian SPLC.

Though many seem to have forgotten in the aftermath of his victory, Youngkin was blasted by conservatives during the campaign season for his lack of a principled stance on abortion and life issues, as well as for remaining quiet on the 2nd Amendment, just a year after Democrats sought to enact some of the most radical gun control and confiscation legislation in America’s history right in his home state of Virginia.

Shortly after being elected, Youngkin publicly stated that he would do nothing to stop vaccine and mask mandates enacted by Democrat-controlled Virginia localities, despite the issue playing a central role in the 2021 Gubernatorial campaign, with Youngkin himself promising to end the mandates.