Geraldo Rivera Has Been Accused of Sexual Misconduct, Admitted To ‘Degrading’ Group Sex And Affair With Justin Trudeau’s Mom

Geraldo Rivera Has Been Accused of Sexual Misconduct, Admitted To ‘Degrading’ Group Sex And Affair With Justin Trudeau’s Mom

Who Is This Guy To Lecture Others On Morality?

Liberal Fox News personality Geraldo Rivera confessed in his own memoir to engaging in rampant workplace sex, and actress Bette Midler has accused Rivera of groping her.

Here is the passage from Geraldo Rivera’s 1991 autobiography Exposing Myself in which Rivera describes his tryst with the married wife of former Canadian Prime Minister Pierre Trudeau, who also happens to be the mother of current Canadian prime minister Justin Trudeau: 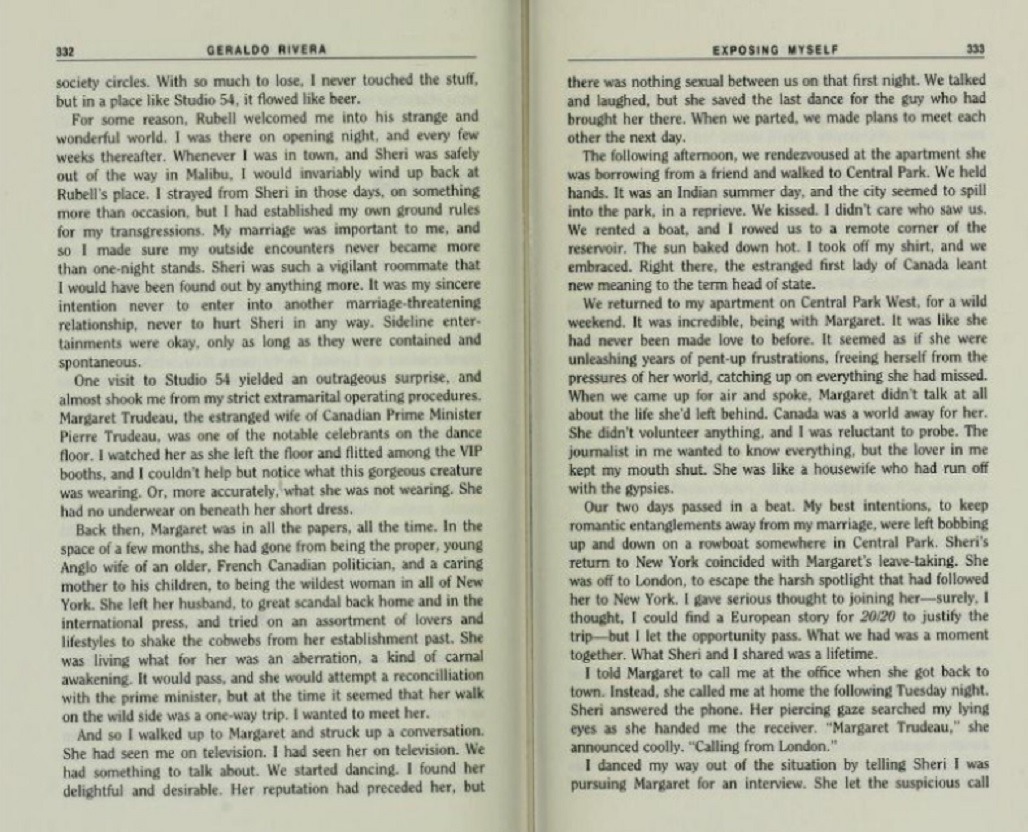 Here is Geraldo smiling with Fidel Castro, from his 1991 book. How do you think Cuban-American viewers of Fox News might feel about this? 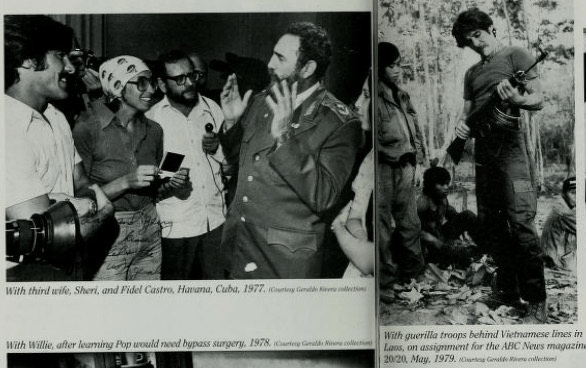 A young woman reportedly consented to fornication with Geraldo and his roommates, who took turns fornicating with her, with Rivera admitting that “Today, I would be filled with rescue fantasies for this creature: then, all I wanted to do was outperform my roommates. I announced I would be first up, leading the girl into my bedroom and silently marveling at the good fortune that had smiled on our home. Later that evening, when my turn came up again, I took some time to talk with her. Pat. I think her name was Pat. She was a little on the slim side. Something about her reminded me of the daughter who loses her baby near the end of The Grapes of Wrath… It was demeaning, degrading, and dishonorable, and I was in the middle of it. Any man of conscience would have tried to talk some sense into this girl, but not me, not then… A stiff dick has no conscience.”

Rivera also states, referring to workplace sex, (p. 195) that “I discovered the room on an impulse born of necessity. I had two cute and smart young women working for me at the time, college coeds from out of town who were infatuated with the television news business and their proximity to the local star of the day. They were attractive and dedicated, and after a (short) time the infatuation became mutual. On one unusually slow news day, things heated up to where all indications suggested an urgent need for privacy. We found it, in the boiler room, and from that day forward the three of us would regularly disappear there. All we had in the way of furniture was a chair which made our entanglements daunting and creative, but we were always up to the challenge.”

“I met most of my young ladies at work,” Rivera wrote on page 47. He adds, “Despite my saintly professional calling, I moved through women with ravenous delight. Romantically, this was a sloppy time for me – find ’em, fuck ’em, forget ’em – but I computed my divine balance sheet against my daytime heroics and still came out again.”

On page 46, Rivera describes taking a woman to get an abortion in 1968, relying on his connections to the mafia to find someone who would illegally abort the child. “Sally wanted to move on and keep flying, and I wanted nothing to do with a wife and child; abortion was the only alternative. Trouble was, in 1968, it was also illegal. Pal Joey stepped in to bail me out. He arranged for us to use an abortionist favored by his mob cronies, a gypsy from the Bensonhurst section of Brooklyn. He helped me pay for it. There was no way I could afford the three-hundred-dollar fee on my own … ‘We just aborted your son,’ Sally told me on the long, quiet subway ride back to Manhattan.”

Actress Bette Midler, responding many years ago to Geraldo Rivera’s autobiography, alleged that Rivera and his producer in the 1970’s “pushed me into my bathroom, they broke two poppers and pushed them under my nose and proceeded to grope me.”

“Although I recall the time @BetteMidler has alluded to much differently than she, that does not change the fact that she has a right to speak out & demand an apology from me, for in the very least, publically [sic] embarrassing her all those years ago,” Rivera wrote on Twitter. “Bette, I apologize.”

Hearing crazy talk on cable TV right now about folks having the constitutional right not to get vaccinated.

Yes (they may be dopey) but they do have that right.

We too have rights: to deny the unvaccinated access to our home, school or business.