The Republican Primary for Georgia Governor is May 24

Georgia gubernatorial candidate Kandiss Taylor has vowed to demolish the Georgia Guidestones by executive order if elected in the Peach State. The Georgia Guidestones, which stand in Georgia’s Elbert County, outline the globalist depopulation agenda. Kandiss Taylor is also vowing to fight anti-white racism and the leftist indoctrination of children in Georgia’s schools. In Taylor’s new ad she goes headfirst at the Satanic cabal that governs world affairs.

Kandiss Taylor is running in the Republican primary against Brian Kemp, the quisling incumbent governor who met with a suspected Chinese spy and worked against President Donald Trump during election overtime, and David Perdue, who lost the 2020 U.S. Senate race in Georgia. The Campaign Show with Patrick Howley discussed Taylor’s proposals on Monday (WATCH THE SHOW HERE).

I am the ONLY candidate bold enough to stand up to the Luciferian Cabal.

Elect me Governor of Georgia, and I will bring the Satanic Regime to its knees— and DEMOLISH the Georgia Guidestones.

Join me in my fight to #TearThemDown!

With the release of her Georgia Guidestones proposal, Georgia Republican gubernatorial candidate Kandiss Taylor has now released all of her ten executive orders that she says she will sign on the first day of her potential governorship. Taylor is running on the slogan “Jesus Guns Babies” in the May 24 Republican primary.

“I will not cower or back down. I’m in this race to win it. Evil can not be negotiated with and must be crushed. The Progressive Left is now coming for your children. EO Number 10 is going to shake the nation. Stay tuned,” Kandiss Taylor stated in rolling out her executive orders.

Taylor’s first nine executive orders include “2020 Election Investigation Commission…Mandate Ban for Governmental Entities in GA (“no mandate on masks or vaccines shall be imposed by governmental entities in our state”)…Groomer Ban in Public Education Pre-K through 12th Grade…Dress Code for Public Schools…Return to our Foundation (“Oppression of any race, anti-white racism, communism, and sexual perversion being taught or encouraged will be dealt with as a code of ethics violation”)…Funds For Christian Programs…Fund for GA State Guard…Defund Abortion…Adoption Law Commission.” 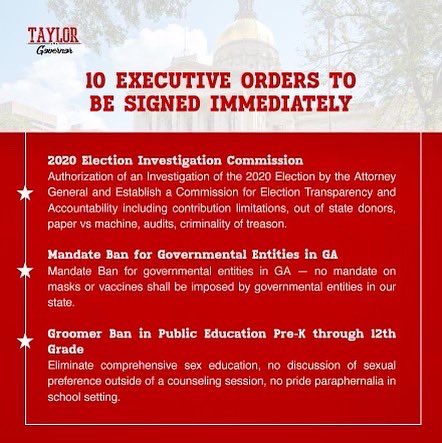 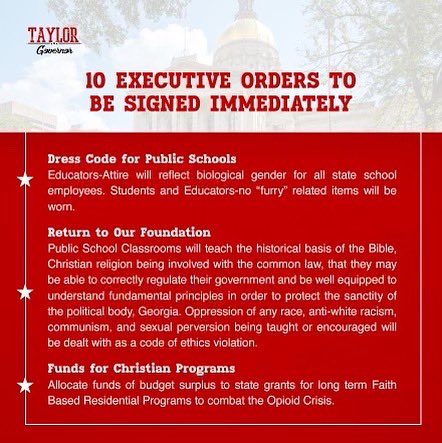 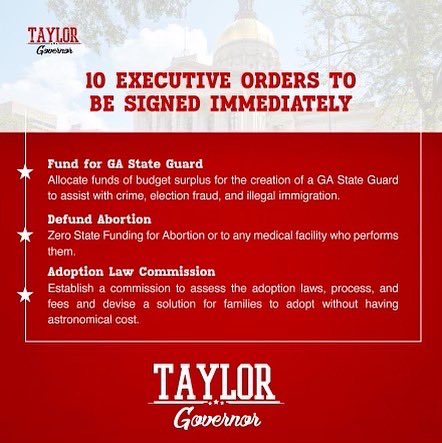 As NATIONAL FILE reported on Kandiss Taylor’s opponent, the “Manchurian Governor” Brian Kemp: Republican Georgia governor Brian Kemp met with and made deals with the Chinese Communist Party, according to Chinese-language records. Kemp reportedly “warmly welcomed” the Chinese Consul General from Houston in a meeting in which Kemp invited Chinese business investment in Georgia. That Consul General was accused by the Trump administration’s State Department of running an espionage ring, and the United States closed his Consulate in July 2020. Kemp is trying to stop China’s geopolitical foe President Donald Trump from getting a fair count of the votes in the 2020 presidential election in Georgia. Kemp’s former chief of staff lobbies for Dominion Voting Systems, the disputed election technology company whose machines are used in Georgia. (RELATED: Secretary of State Raffensperger Begged For Chinese Votes).