As serious questions surrounding the tabulation process in Fulton County, Georgia, remain unanswered, officials in that county are slow walking critical documents to kill the clock

In a stunningly transparent and disingenuous effort to run out the clock on any challenge to the 2020 General Election, the attorney for Fulton County, Georgia informed an open records petitioner that no information would be available until 24 hours before the January 20, 2021 Presidential Inauguration.

These forms certify the secure chain of custody for absentee ballots, mail-in ballots, and ballots that were submitted via the many drop boxes placed around the state.

On December 7, 2020 the news media outlet received a letter from the Office of the County Attorney for Fulton County which stated:

“Due to the numerous factors like multiple requests related to our prior election, the current pandemic, recounts, and the upcoming election, our response times for election related materials have been significantly delayed. We believe we can have responsive records to you by January 19, 2021. That said, should responsive materials come available sooner, we will provide them to you.” 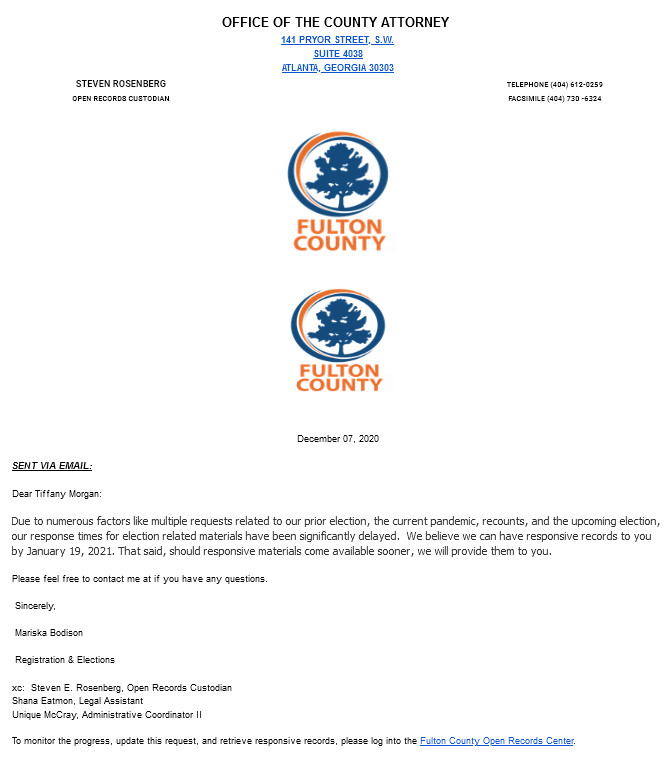 January 19, 2021 is just one day – 24 hours – before the Presidential Inauguration in Washington, DC. This timetable would effectively make any criminality found in the chain of custody reports moot, thus rendering any vote fraud or ballot tampering unactionable where the results of the presidential election are concerned.

The Star also has yet to hear directly from the Fulton County election authorities, a transgression of the Georgia Open Records Act, which states that “agencies have three days to supply a response.”

Ballot transfer forms were part of a new rule under scrutiny in Georgia. They were created not by legislation but by an Election Code Emergency Rule (183-1-14-0.8-.14). Litigation currently working way through the federal court system questions the constitutionality of unlegislated changes to election procedures mandated by election law.

The forms document the chain of custody of ballots collected from drop boxes.

Roughly 300 drop boxes were placed around the State to collect absentee ballots in the November 2020 general election. The Emergency Rule mandated that every “absentee ballot drop box collection team shall complete and sign a ballot transfer form upon removing the ballots from the drop box, which shall include the date, time, location and number of ballots.”

Incredibly, The Star received notification from Dekalb County Assistant County Attorney, Dexter Q. Bond, Jr., stating, “it has not yet been determined if responsive records to your request exist.”