The California State Board of Pharmacy, a department of Governor Gavin Newsom’s Department of Consumer Affairs, has a special policy to speed up the review process for foreign refugees to become pharmacists, according to its “PHARMACIST EXAMINATION FOR LICENSURE APPLICATION INSTRUCTIONS.” Why does the state of California want refugees to become pharmacists so badly that they are willing to prioritize refugee applicants over everyone else?

“To be licensed in California as a pharmacist, you must pass the North American Pharmacist Licensure Examination (NAPLEX) and the California Practice Standards and Jurisprudence Examination for Pharmacists (CPJE). To be made eligible to sit for the NAPLEX and/or CPJE, the California State Board of Pharmacy (Board) must determine that you have met all the requirements for examination,” the document states, noting that applicants should “Allow the Board 30 days to process your application.”

The Board lists the following as “ACCEPTABLE DOCUMENTATION” to prove refugee status: “Form I-94, Arrival/Departure Record, with an admission class code such as “RE” (Refugee) or “AY” (Asylee) or other information designating the person a refugee or asylee…Special immigrant visa that includes the of “SI” or “SQ.”…Permanent Resident Card (Form I-551), commonly known as a “Green Card,” with a category designation indicating that the person was admitted as a refugee or asylee…An order from a court of competent jurisdiction or other documentary evidence that provides reasonable assurance that the applicant qualifies for expedited licensure.” 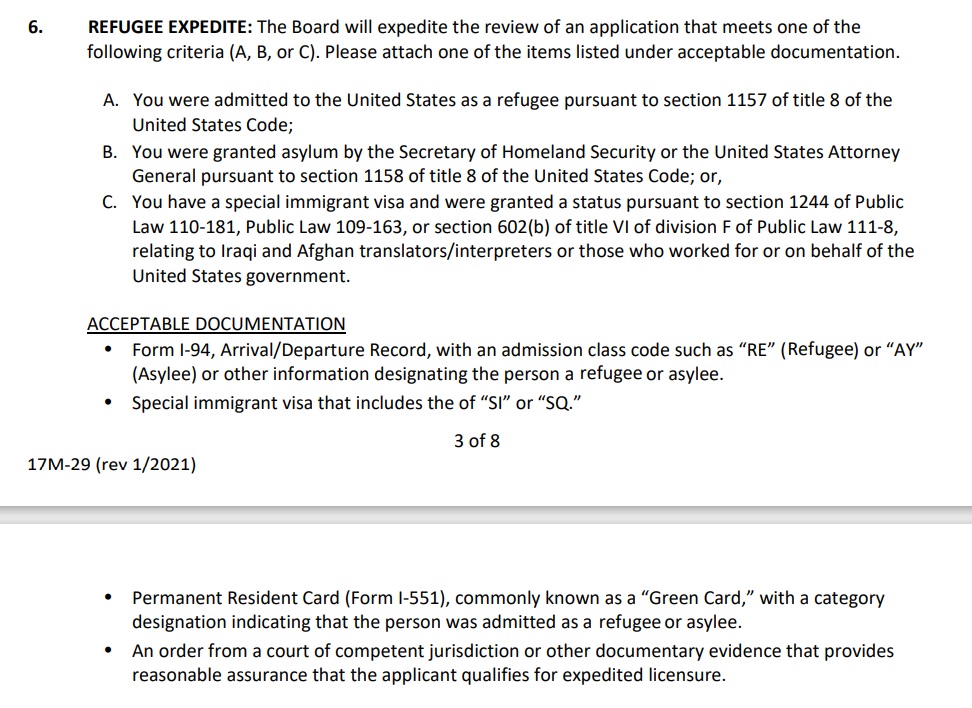