Debunked Models Shut Down The Economy

The Bill and Melinda Gates Foundation recently provided massive amounts of funding to both the Institute for Health Metrics and Evaluation (IHME) and Imperial College in London, which both produced wildly incorrect models for the Coronavirus outbreak that sparked worldwide panic and provided false justification for government leaders to shut down the American economy, creating mass unemployment. Bill Gates is a vaccine oligarch who recently laughed at America’s economic devastation, so committed he is to his vision of vaccinating the world’s population and keeping society locked down until that becomes possible. Gates, like his crony Dr. Anthony Fauci, has fought the use of hydroxychloroquine to treat the virus and has claimed that society will never fully return to normal until a vaccine is ready. (READ: The Dark Truth About Fauci, Birx, Bill Gates and the Globalist Elites).

Deborah Birx, whose PA medical license is expired, used a bogus Gates-funded model to shut down the country, defended counting non-definitive cases as Coronavirus, sits on board of Global Fund which has taken more than $2 BILLION from Gates Foundation…https://t.co/DhgcEibTdD

In March 2020, during the Coronavirus outbreak, the Gates Foundation awarded a more than $79 million grant to Imperial College London. The Imperial College London model, spearheaded by team leader Neil Ferguson, projected 2.2 million American casualties. The disastrous model led to Elon Musk lambasting Ferguson, who resigned as an adviser to the British government when he was caught flaunting the very lockdown that his numbers inspired. Imperial College London admits on its website that its research on arboviruses, which includes work on vaccine projections undertaken by Neil Ferguson himself is Gates-funded, stating, “Our research is funded by the Bill and Melinda Gates Foundation, the US National Institutes of Health and the MRC.” Business Insider reports that Neil Ferguson’s MRC Center for Global Infectious Disease at Imperial College “gets tens of millions of dollars in annual funding from the Bill & Melinda Gates Foundation, and works with the UK National Health Service, the US Centres for Disease Prevention and Control (CDC), and is tasked with supplying the World Health Organization with “rapid analysis of urgent infectious disease problems.” A job posting that opened in December 2019 and closed in January 2020 stated (emphasis added): “We are seeking an outstanding Research Lead for the Vaccine Impact Modelling Consortium (https://www.vaccineimpact.org/). This major collaborative initiative directed by Professor Neil Ferguson, is based within the MRC Centre for Global Infectious Disease Analysis at Imperial College London and funded jointly by the Bill and Melinda Gates Foundation (BMGF) and Gavi, the Vaccine Alliance ($11 million over 2016-22).” 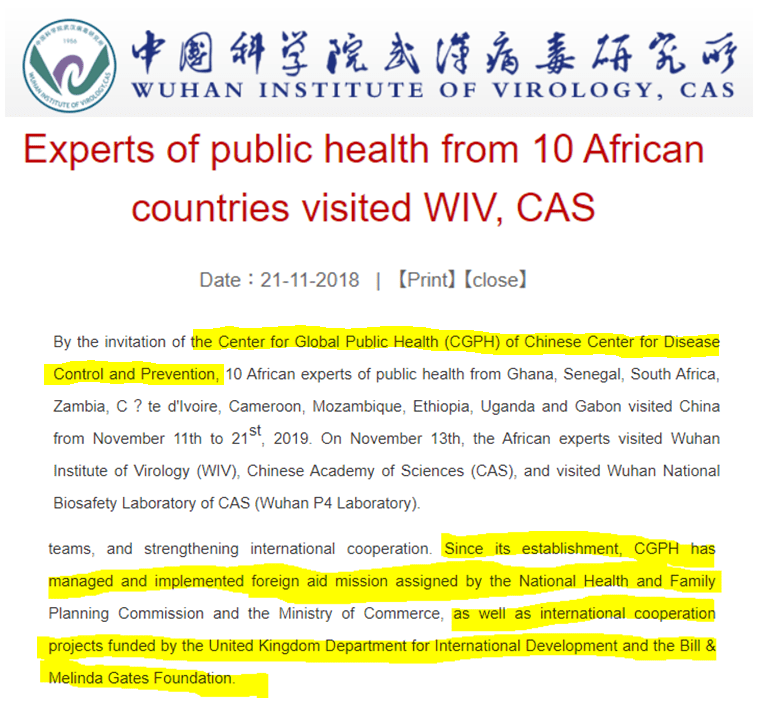