Upset about Dr. Seuss being canceled? It's no joke on Facebook.

Following the revelation that six popular Dr. Seuss children’s books have been canceled due to allegedly racist imagery, social media users made a series of memes remarking about the sharp cultural change in the United States after Joe Biden took office and Democrats gained control of the federal government. Facebook fact checked these whimsical images, and considers them to be fake news.

One meme – and many others like it – remarks that, during President Donald Trump’s administration, the leadership apparatus of the Islamic State in Syria and Iraq was systematically rooted out and its borders destroyed, and an Iranian general was killed by a surgical attack in Iraq, while humorously noting that, during Joe Biden’s regime, the two most prominent casualties have been Dr. Seuss books and Mr. Potato Head, who was briefly made gender nonbinary earlier this month.

National File was able to confirm this meme was fact checked by Lead Stories, an outfit founded by an ex-CNN employee who inexplicably is paid by Facebook to determine the veracity of memes.

More memes like it were also fact checked, including one posted by U.S. House candidate Jarome Bell, who is running for office in Virginia. 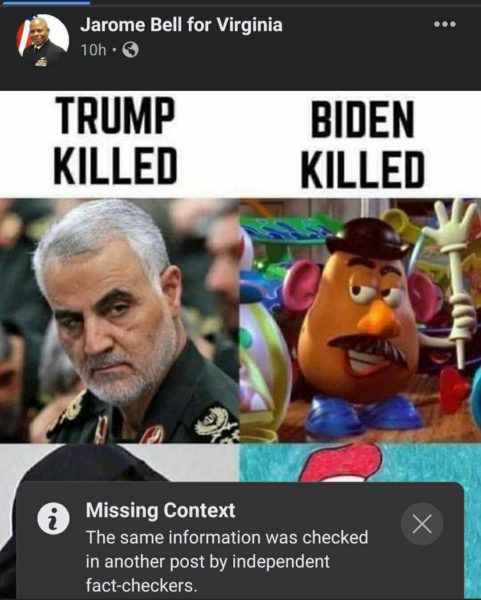 Another reader provided National File with a screen shot of a similar meme being fact checked for the same reason. 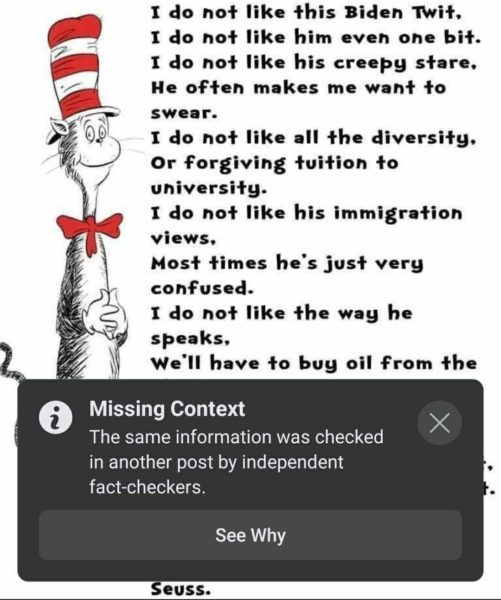 In their explanation, Lead Stories dutifully points out that Biden did not, in fact, murder Mr. Potatohead or Dr. Seuss. In fact, the decision to cancel both children’s brands was made by the respective brands, and not the Biden administration. It remains unknown if anyone actually believed Biden issued these orders, or if the fact check tactic was merely used to stop the spread of ideas that question the new leftist paradigm.

Another meme, also fact checked by Lead Stories, uses the iconic character from “The Cat In The Hat” to mock modern culture, represented by Biden’s ascension to the White House. National File was able to confirm that the outfit run by a CNN reject also claimed this whimsical image represents fake news.

In their denunciation of the meme, Lead Stories explains that “The Cat In The Hat” was not, in fact, one of the six books canceled by the copyright holder of Dr. Seuss’s books.

However, “The Cat In The Hat” has been labeled racist by top left wing education websites since 2017, when a pronouncement was made after First Lady Melania Trump gifted the book, along with several others, to a Virginia school district.

“The Cat In the Hat lies somewhere in the middle,” the website proclaimed. “Although less explicitly racist, the main character owes a debt to blackface vaudeville, and was based on a black woman who worked as an elevator operator, said Philip Nel, a professor of English as Kansas State University.”

Big tech censorship of news items and memes led the alternative tech website Gab to explode in user growth and activity in 2021. In January, Gab received more traffic than virtually every mainstream news publication, with more than 272 million visitors during the month.