Facebook allows alleged baby rapist to remain, but the 17-year-old who claims self defense was banned.

by Archive
in LGBTQ, News

The Facebook account of Brice Gage Watkins remains active into Friday morning after the United States Marshal Service arrested Watkins on Thursday for allegedly raping a 1-year-old child, recording the act, then distributing it to his friends via Facebook Messenger.

Police say Watkins, who appears to have been in a homosexual relationship as recently as July according to photos and videos available on his Facebook profile, sexually abused the child, recorded the act, then distributed the video to friends using Facebook Messenger. It appears as though Watkins was reported to police by individuals who received the video from Watkins.

Watkins’ alleged victim may have been the child of individuals who knew and had a relationship with Watkins, and the abuse may have taken place in the victim’s home. The child turned 1-year-old in June.

While charges against Watkins were announced by police in early August, with more announced by the mid-August, the 22-year-old Enid, Oklahoma man’s Facebook profile has remained active on the social media platform.

Watkins’ most recent Facebook post, dated to June 11, shows several videos of Watkins holding hands with, embracing, kissing, and making out with black man while fireworks explode. The videos also show the couple playing with sparklers while kissing, and driving through city streets while holding hands and Watkins appears to be in stages of undress. Several other photos on Watkins’ profile appear to show him in intimate positions with the same man. 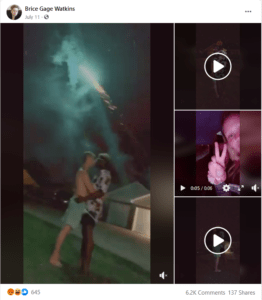 In a press release from the Oklahoma City Police Department, the law enforcement agency reveals that Watkins was arrested by federal marshals in San Marcos, Texas on Thursday.

Despite the horrific nature of Watkins’ alleged crimes, Facebook has allowed his Facebook profile to remain active, despite the standard set when the big tech platform banned alleged Kenosha shooter Kyle Rittenhouse.

While there are currently no reports on the circumstances that led Watkins’ to allegedly commit the crime, or whether Watkins plans to plea guilty, Rittenhouse’s legal team maintains that the 17-year-old will be found not guilty. Many outside observers believe Rittenhouse shot three men, convicted pedophile Joseph Rosenbaum, convicted domestic abuser Anthony Huber, and suspected burglar Gaige Grosskreutz.

He distributed the videos through Facebook messenger, by the way.