A candidate for Secretary of State in Louisiana was suppressed from posting news links and sharing content with other groups on Facebook until the day of her election, preventing her from promoting her campaign, according to a complaint filed with the state of Louisiana.

“I feel like a horse in a race whose gate was never lifted,” Jennings Smith told National File.

Jennings Smith ended up getting 78,000 votes in her statewide race. But she was not allowed to use Facebook to promote her political campaign, and that is when she said the harassment and suppression of her pages happened.

From her official complaint to the LA assistant attorney, Jennings knows how to grow a loyal following on Facebook “To me my business page on Facebook is a business asset. I have been offered $14,000 for my pages by a DNC group. I can prove people were active on my page and looking for my content. Everything was fine with my pages until I qualified to run for Secretary of State.”

“I had built a page, Rebels Against Goverment, that had 123,000 followers and Facebook prevented me from posting links or posts from my Campaign page. My page had more active people than my local news station, and then it felt like there was no activity at all.  Posts I would get 20,000 likes on I would get 6.  I couldn’t even use the page I had built on my own. I got that many votes in the election because of my involvement with activism in the state, Facebook suppressed me from reaching anyone else,” Jennings Smith told National File.

“We need regulation on social media, and to develop case law,” said Jennings Smith, who was a Paralegal for 14 years said.

I paid my entry fee to run, and Facebook accepted my campaign. What they did was almost total suppression and I can prove everything. I was allowed to post photos, but that is all.   I have screenshots and emails that prove that I was censored. Other people have gone through this same problem with their campaigns, but they didn’t remember to document the abuse.  I knew what to do,” she said.

“I was never given any reason why I was blocked from groups or posting news links,” she said. I was prohibited the entire week before the election.  Everyone else was campaigning, to my knowledge.  I was the only one suppressed,” Jennings Smith said. 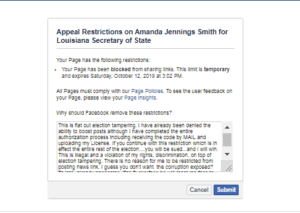 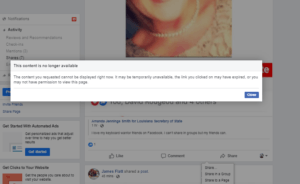 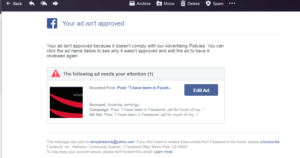 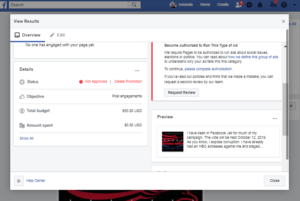 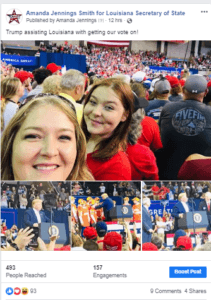 “I received my official letter from Facebook, to confirm my identity with a code for running facebook political ads,” Jennings Smith said, and which National File confirmed. 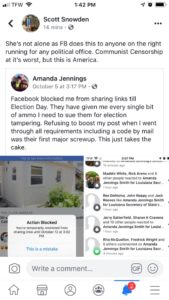 Restricted from posting to other groups, until  3:00 PM the day of the election: 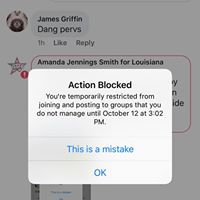 “Censorship on social media espicially of candidates shows that our laws have not caught up with the social media age. Something needs to be done to protect the less funded candidates in their campaigns.  I don’t really want to deal with a lawsuit, but I will do it to help the little guy.  If someone doesn’t do it, nothing is going to change,” Jennings Smith said.

Posted links, on media, were broken, Democrat page comes up, Jennings Smith page does not:

“I planned on using facebook for the majority of my advertising, but I couldn’t because and all of my links were broken,” Jenning Smith says in her video.

Jennings Smith is planning on filing a lawsuit that she hopes will help shape law regarding how social media deals with political campaigns.

“Someone has to stand up for all the people who want change,” Jennings Smith said.

“There is no complaint process for election problems at Facebook yet. Not for foreign interference or local problems.  That is a problem,” Jennings-Smith said.

“It is interference if Facebook can pick and choose who can run. There are all kinds of defense funds for illegals, but not for people like me.”

Jennings Smith did receive a reply from the Assistant District Attorney, John G. Spires, who wrote “While the issues presented by social media, for the most part, are federal (because of its impact, for example on interstate commerce or federal elections), your situation nevertheless reveals its impact on state and local issues.”