A Texas congressional candidate who perviously served as President Barack H. Obama’s White House physician and is now running for Congress as a Republican is under federal investigation, a response to a Freedom of Information Act (FOIA) request confirms.

On the campaign trail, Dr. Ronny Jackson has not had to answer for allegedly running a “pill mill” during his tenure in the Obama administration. Due to lack of information on the investigation, Jackson’s campaign has been able to skirt around questions about whether the federal government was actually investigating him.

Jackson is running in a crowded 15-way primary in Texas’ 13th Congressional District to replace outgoing Rep. Mac Thornberry (R-TX) who is retiring.

Cameron R. Nelson, Commander of the Judge Advocate General’s Corp of the United States Navy denied to release any information about the ongoing investigation upon reviewing the FOIA request, but did confirm there is an investigation.

“Under the guidelines, of the FOIA I have reviewed the responsive documents and, in coordination with the Department of Defense Inspector General (DoD IG), determined that the documents are not releaseable [sic],” Nelson said. “DoD IG confirmed that disclosure of those records could be reasonably expected to interfere with their ongoing investigation.” 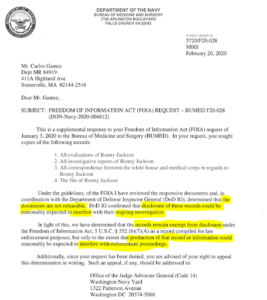 Jackson, who diagnosed himself with a mental illness during a recent radio interview, is a retired Rear Admiral in the U.S. Navy.

Saturday, sources confirmed for National File that Jackson faces a court martial depending on the outcome of the investigation.

“Jackson retired from Navy with caveat – because the investigation is still ongoing – that should they [the Navy] decide to court martial him, he has to come back into the Navy and submit to court martial,” one source said.

There is no precedent for a sitting Congressman being subject to a court martial proceeding.

“In light of this, we have determined the records remain exempt from disclosure under the Freedom of Information Act 5, U.S.C. § 552 (b)(7)(A) as a record compiled for law enforcement purposes, but only to the extent that production of that record or information could reasonably be expected to interfere with enforcement proceedings,” the document said.

The second page of the response to the FOIA request details appellate guidelines, should the requester want to appeal the federal government’s decision not to disclose information into the investigation. 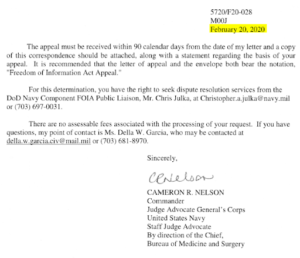 Jackson’s primary is on Tuesday.

His major challenger is businessman Chris Ekstrom, who has been endorsed by a bevy of sitting Congressman, the Club for Growth, and several grassroots conservative groups in Texas.