Arizona Republican State Senate President Karen Fann admitted why the Arizona Senate handed out a formal censure to 6th Arizona State Senator Wendy Rogers (6th District) in a 24 to 3 vote on Tuesday. The Senate is attempting to bully Wendy Rogers for delivering an impassioned speech at the America First Political Action Conference (AFPAC), hosted by Nick Fuentes, which was a massive success featuring speeches from top thinkers including Vincent James and Reverend Jesse Lee Peterson, Gab CEO Andrew Torba, and various politicians. Karen Fann notably did not try to decertify the election to recognize President Donald Trump as the winner of the disputed 2020 election, thus helping to hand the White House to the globalist Joe Biden regime.

“Freedom of speech is one of the most precious rights we have under heaven. This censure is nothing more than an attempt to limit my speech,” Wendy Rogers stated on the day she cast a vote in the Senate to support herself — joining two others, Republicans Nancy Barto and Warren Petersen. Eleven Republicans betrayed Wendy Rogers and voted against her.

Republican State Senate President Karen Fann texted our NATIONAL FILE source: “Sorry I didn’t see this earlier with all the commotion yesterday I am hoping not to comment any further regarding the censure. It was something we absolutely hated to do. As Republicans we stand by the 1st amendment but that does not allow her to threaten all our caucus members with political destruction or calling us communists. I even gave her a chance to make things right with our caucus and she refused, saying she stands by her words. I am praying she takes this opportunity to understand we should be working together as a team and not attacking each other.” 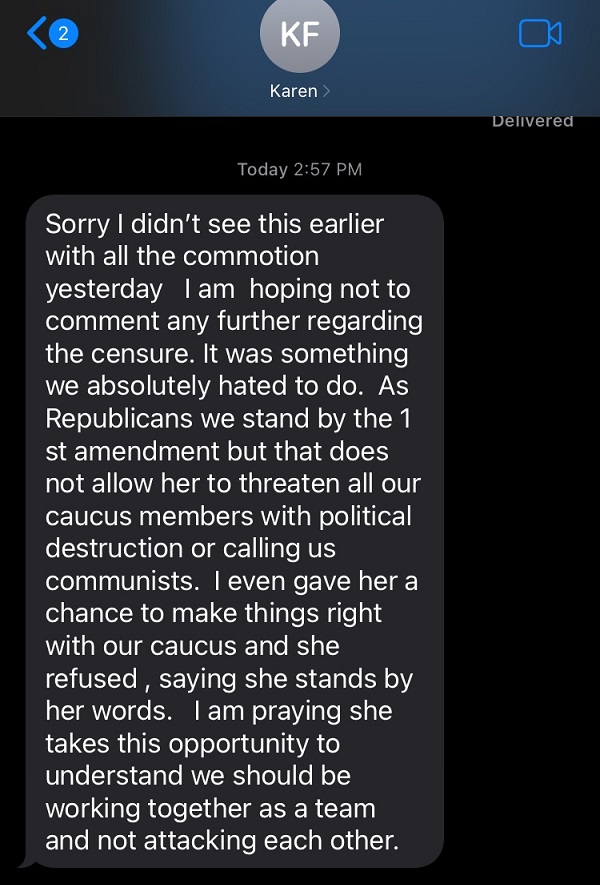