Following recent media coverage of the “It’s OK To Be White”  flyer campaign at several universities, National File has received a compendium of spreadsheet data documenting overwhelming negative responses and calls for government forces to violate the First Amendment and imprison those responsible.

The cases span the three-year period of IOBTW activism, starting in 2017.

National File will not include instances of organizations or individuals using the IOTBW campaign for underhanded purposes such as advertising political websites or merchandise.

The spreadsheet screenshot below (from 2017) shows that even when only counting academic responses and video coverage, the outraged response has been significant. 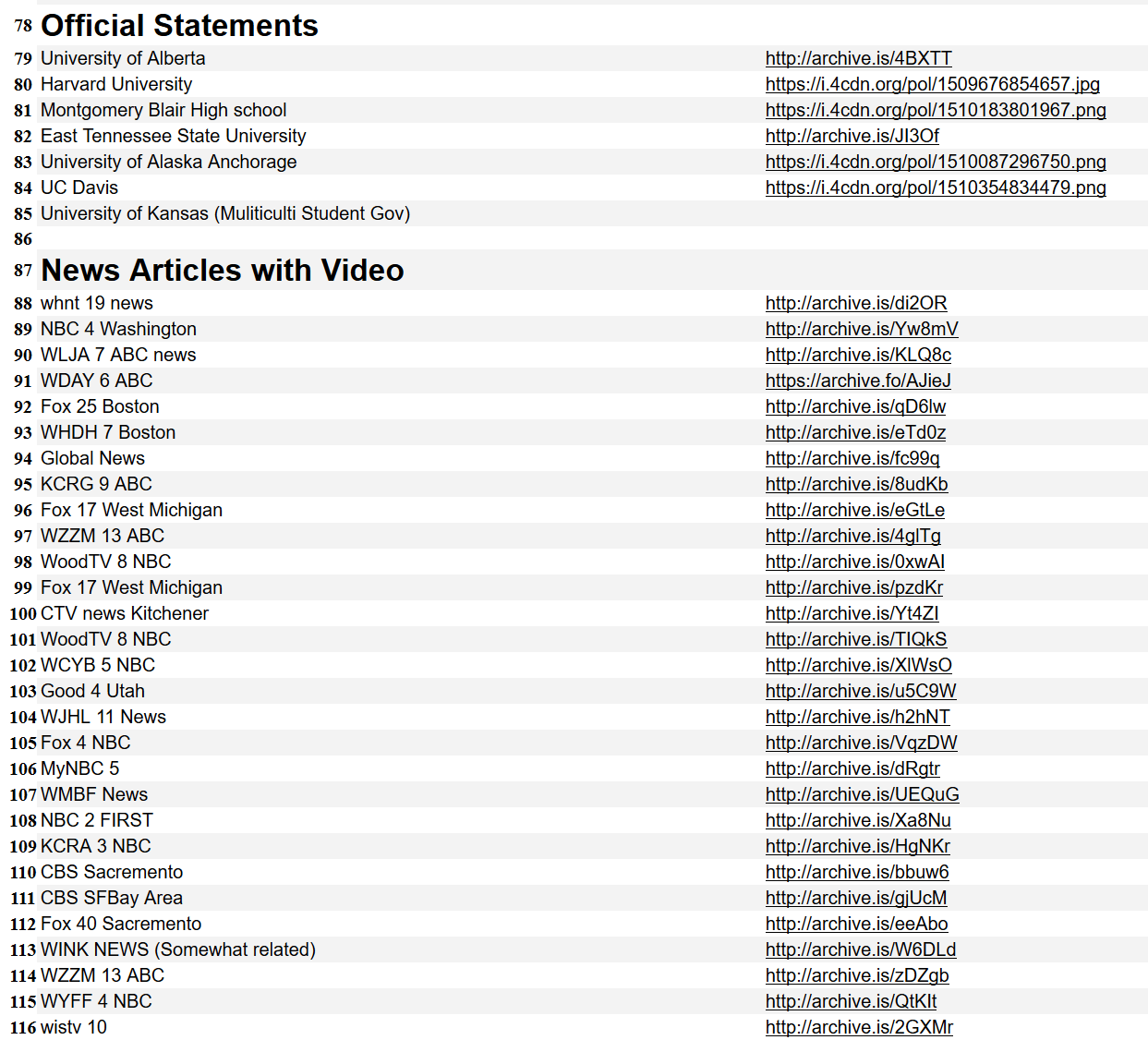 There have been many frenzied media responses to the flyers incorrectly labeling them as racist, white supremacist, or part of a “troll campaign,” but the cases this reporter will focus on are ones involving police investigations or attempts to suppress free speech.

Most recently, National File reported on a police “hate crime” investigation in Oklahoma City, Oklahoma after flyers were found last week at the OKC University of Law.

As the data from 2019 alone (below) shows, media coverage has ramped up significantly even as the coverage encourages more citizen activists to put up the flyers. 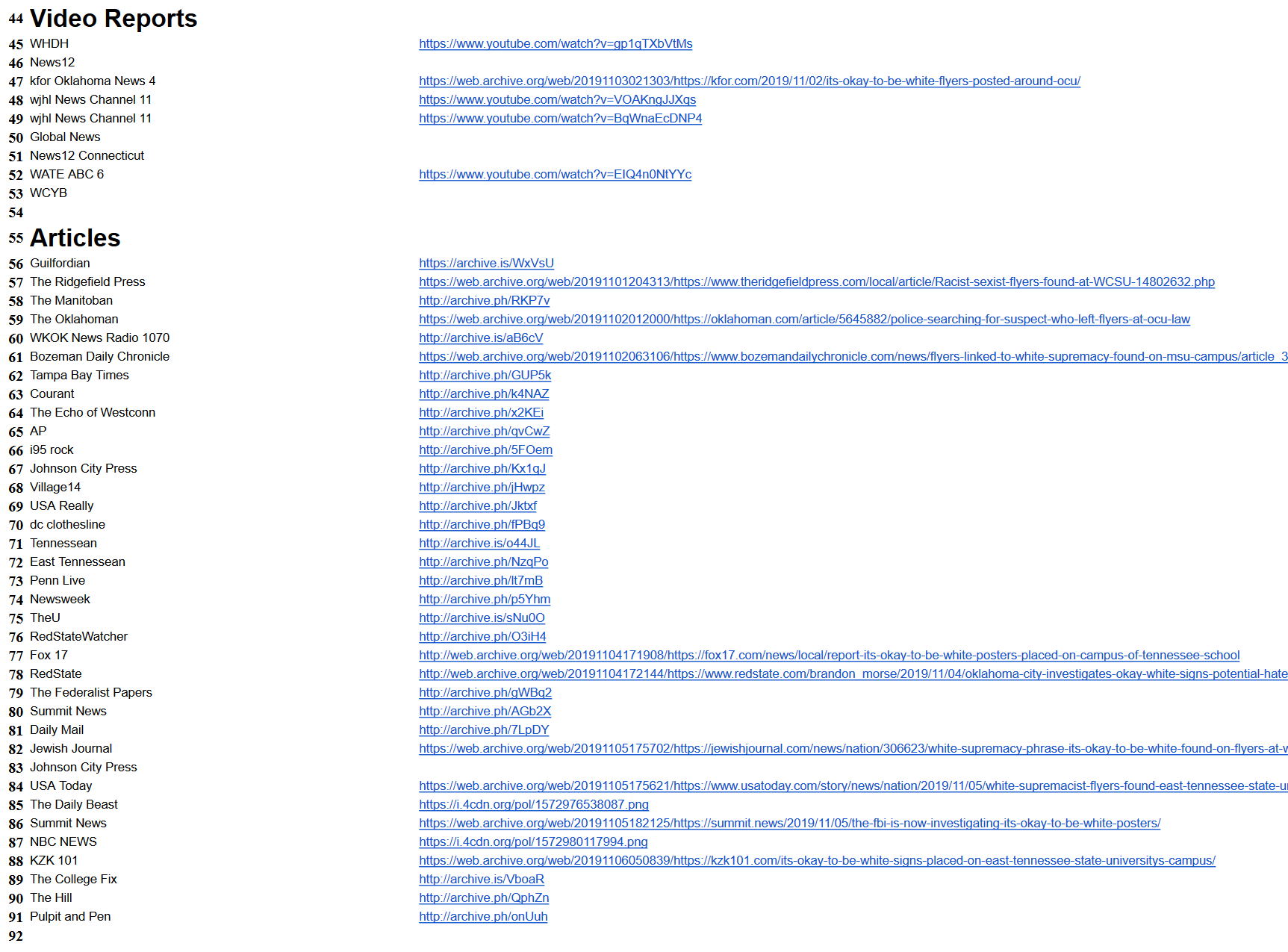 In another case from last week, Western Connecticut State University President John B. Clark released a verbose and invective-filled statement referencing “hate filled flyers and inscriptions” and begging students “who may have witnessed this disgusting behavior to contact our University Police immediately.”

Across the border in Halifax, Canada, the official Mount Saint Vincent University (MSVU) Twitter account posted a statement condemning “racist posters,” and promising an investigation by “our security team,” while an MSVU professor described IOTBW as “so cunning and so dangerous in a lot of ways.”

The final case from this month involves an email sent out by police to University of Mary Washington students in Fredericksburg, Virginia.

The email urges students to call the UMW police, who are already “consulting” with other unnamed law enforcement agencies. The email cites the ADL’s definition of IOTBW as a racist “trolling campaign” by Japanese culture appreciation forum 4chan. 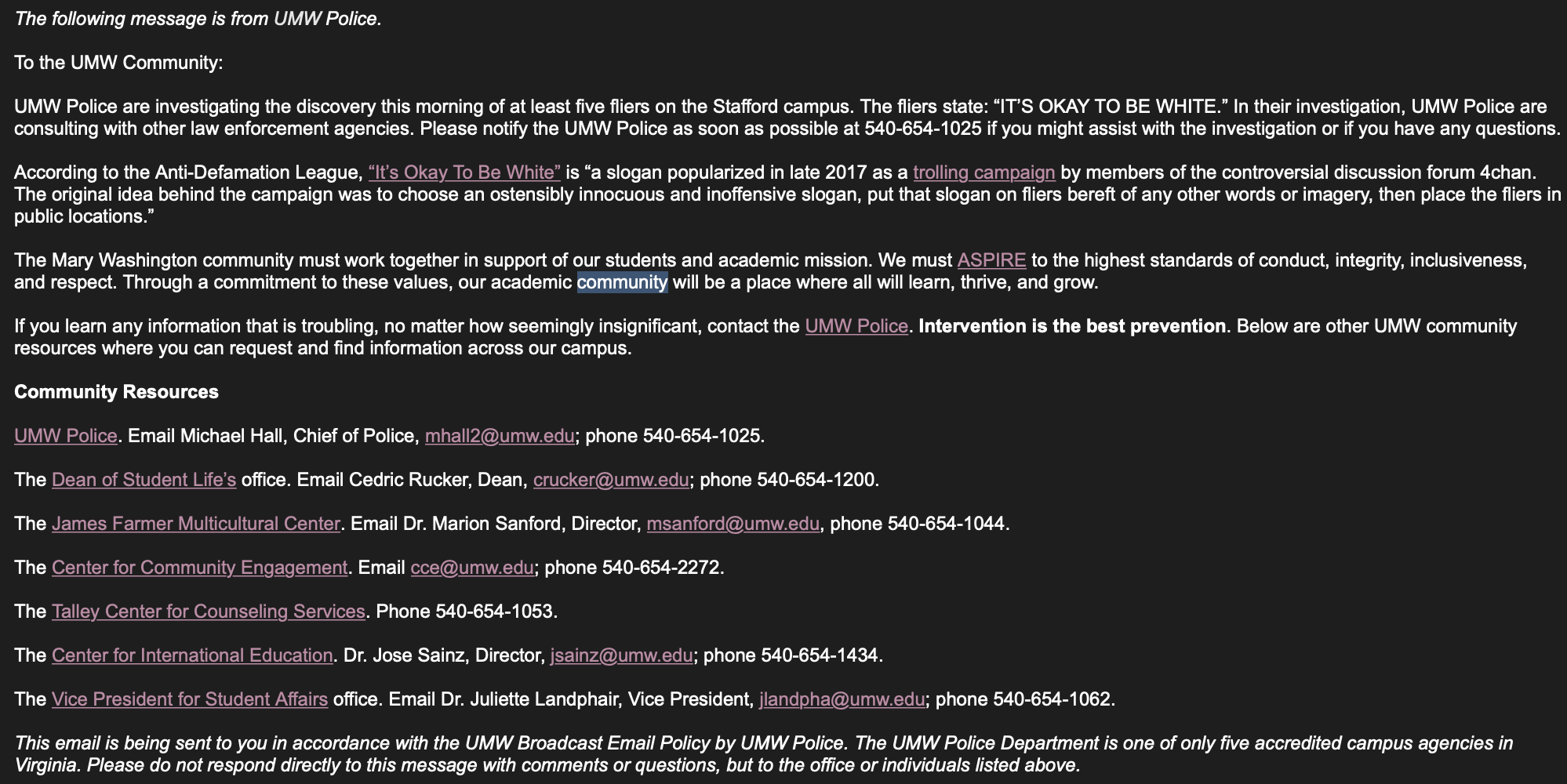 The ADL’s definitions of hate symbols have been widely discredited, as it has tried to tie Pepe the Frog, anti-Antifa symbols, the “OK” hand sign, and YouTuber PewDiePie to white supremacy in the past.

There have been a few instances of public figures putting out nuanced, un-biased responses to IOTBW, such as FOX News host Tucker Carlson’s coverage of the establishment outrage, and Australian Senator Pauline Hanson’s motion for the Senate to recognize the rise in anti-white attacks and that “it is OK to be white,” but these cases are few and far between.

An anonymous citizen activist who helped provide much of the data documenting IOTBW media suppression reached out to National File to give a public statement:

First I’d like to thank everyone who participated in the “It’s Okay To Be White” poster campaign from around the world, especially those who risked state political persecution as well as violent retaliation by left wing terrorist groups such as antifa (who seem to be doing the dirty work for the state in many cases).

One brave soul even distributed these posters in South Africa where the government voted to expropriate land without compensation from white farmers and is tacitly supporting their murder and ethnic cleansing, a situation which was acknowledged by President Trump in a tweet on August 22nd 2018. These poster campaigns are a decentralized global effort with no official leader. I’ve put many hours into promoting the campaign every year since it began in 2017.

The free speech advocate told National File the goal of IOBTW is to “cause MSM, universities and leftists in general to react negatively to the posters thereby publicly exposing the fact that they hate white people (including themselves).”

They added, “When their overreactions include Orwellian police investigations of harmless and legally protected speech this also exposes the totalitarianism of the left.”

The source provided more information on the motivation behind the flyer campaign:

The other purpose of the posters is to directly tell white people that it’s okay for them to be, to exist and they are not inherently evil or oppressive (despite what the left is telling them).

The long term goal of the campaign is to help erode support for the left by publicly exposing their racial hatred and totalitarianism so that eventually they lose power and their stranglehold on academia, MSM and other institutions fades away in a peaceful manner.

National File may update this report as more stories surface in coming weeks.

Responses from the anonymous citizen activist were edited for formatting.