Welcome To Government in 2021

Florida Governor Ron DeSantis is placing Ben and Jerry’s on an official government blacklist because the ice cream company is removing its product from Israel in protest of the Zionist regime’s war actions. DeSantis is standing against free speech and the free market by using the power of the state to blacklist a private company choosing to do business the way it wants. This case has massive implications for civil liberties in America going forward. Which business will be targeted next for not supporting Israel? DeSantis previously banned criticism of Israel or Jewish people in public schools and colleges.

DeSantis stated that “It has come to my attention that Ben & Jerry’s has announced plans to remove its products and prohibit the sale of its ice cream in Judea and Samaria. These actions taken by Ben & Jerry’s fall squarely within the prohibited activities defined by Section 215.4725(1)(a), Florida Statutes. Ben & Jerry’s is a wholly owned subsidiary of Unilever, a publicly traded company in which Florida holds multiple investments. Therefore, I am requesting the State Board of Administration (SBA) immediately place Ben & Jerry’s and Unilever on the Continued Examination Companies that Boycott Israel List, and initiate the process to place Ben & Jerry’s, and by extension Unilever, on the Scrutinized Companies that Boycott Israel List. Please provide an update on the status of this process to me and the other Trustees as soon as possible. Should the State Board of Administration affirmatively place Unilever and its corporate entities on the Scrutinized Companies List and these companies do not cease the boycott of Israel as required by Florida law, the Board must refrain from acquiring any and all Unilever assets consistent with the law.” 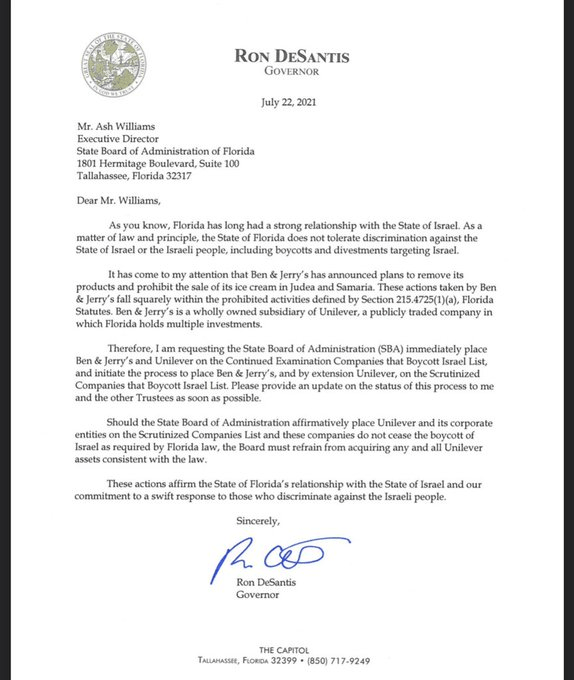