A transgender activist once said "little girls are also kinky." Lauren Witzke was banned for calling this statement "demonic."

Former Republican Senate candidate Lauren Witzke, who is now the spokesman of the pro-election integrity Hold The Line PAC, was banned from Twitter for using the word “demonic” to describe the words of transgender activist Alok Vaid-Menon, who once said that transgender women and young girls should use the same restroom because “little girls are also kinky.”

As National File reported earlier today, a feminist Twitter account posted several disturbing statements made by transgender women. Perhaps the most disturbing is a statement from transgender activist Alok Vaid-Menon, a transgender woman with overwhelming body hair, who once wrote, “The narrative is that transgender people will come into bathrooms and abuse little girls. The supposed ‘purity’ of the victims has remained stagnant.”

Vaid-Menon added, “There are no princesses. Little girls are also kinky. Your kids aren’t as straight and narrow as you think.”

Witzke quote tweeted the statement, adding the caption “Demonic.” She was banned by Twitter for this post. 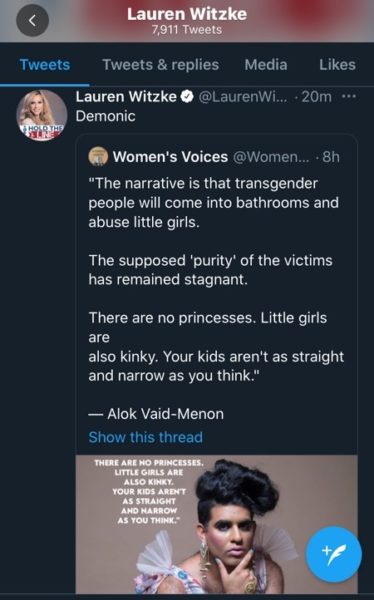 In a statement provided to National File, Witzke said “Twitter has finally suspended my account for calling pedophilia and transgenderism what it is: Demonic.”

“Tech censorship will not stop until every conservative voice is silenced. Republicans chose to do nothing, and this is the price we all have to pay,” declared Witzke. “NEVER stop fighting evil with truth. I will never stop fighting for you.”

Witzke also provided National File with links to her Telegram channel, and to her Gab account, where she posted a similar statement, and pledged to continue using the free speech platform. 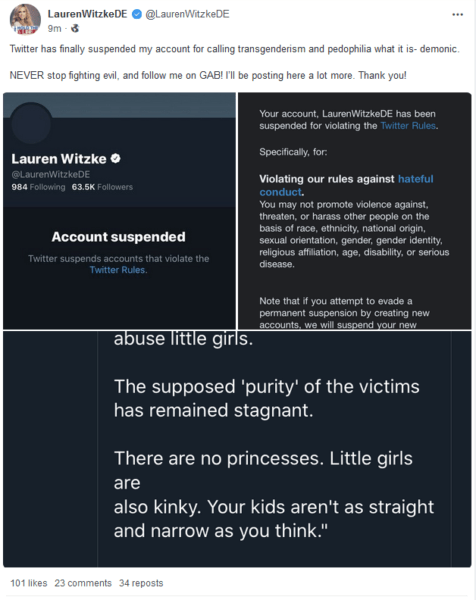 On Telegram, Witzke wrote, “The last tweet before they finally shut me down. Calling pedophiles demonic now violates twitter’s terms of service as “hateful content.” KEEP FIGHTING! It’s your job to pick up the torch and fight for what’s right!”

At the time of publication, Witzke currently has over 6,000 subscribers in her Telegram channel, and over 16,000 followers on her Gab account.