Dominion Voting Systems is front and center in the news today because of “glitches” and flipped vote counts performed by their software. But while Republicans and conservatives call foul on Dominion the Left is silent. That wasn’t the case just one year ago.

In 2019 Senators Elizabeth Warren (D-MA), Amy Klobuchar (D-MN), and Ron Wyden (D-OR), were so upset with the performance of the machines and software provided by Dominion Voting Systems that they penned a formal letter of complaint to the founders and co-CEOs of Dominion’s parent company, H.I.G. Capital, Inc demanding answers.

Then, it appears, the three far-Left Senators found it unacceptable that Dominion software had flipped votes cast for one candidate to another. In each case that they protested, the votes were flipped from their preferred candidate to that candidate’s opponent.

In their letter to Sami Mnaymneh and Tony Tamer – the co-CEOs of H.I.G. Capital, the Senators made no qualms about hos unhappy they were with Dominion.

“In 2018 alone voters in South Carolina [were] reporting machines that switched their votes after they’d inputted them, scanners [were] rejecting paper ballots in Missouri, and busted machines [were] causing long lines in Indiana,” the Senators noted from an article in Vice.

“And, just this year,” the letter went on, “after the Democratic candidate’s electronic tally showed he received an improbable 164 votes out of 55,000 cast in a Pennsylvania state judicial election in 2019, the county’s Republican Chairwoman said, ‘[n]othing went right on Election Day. Everything went wrong. That’s a problem.’”

The letter went on to enumerate seven questions about a litany of concerns regarding H.I.G. Capital and Dominion Voting Services. 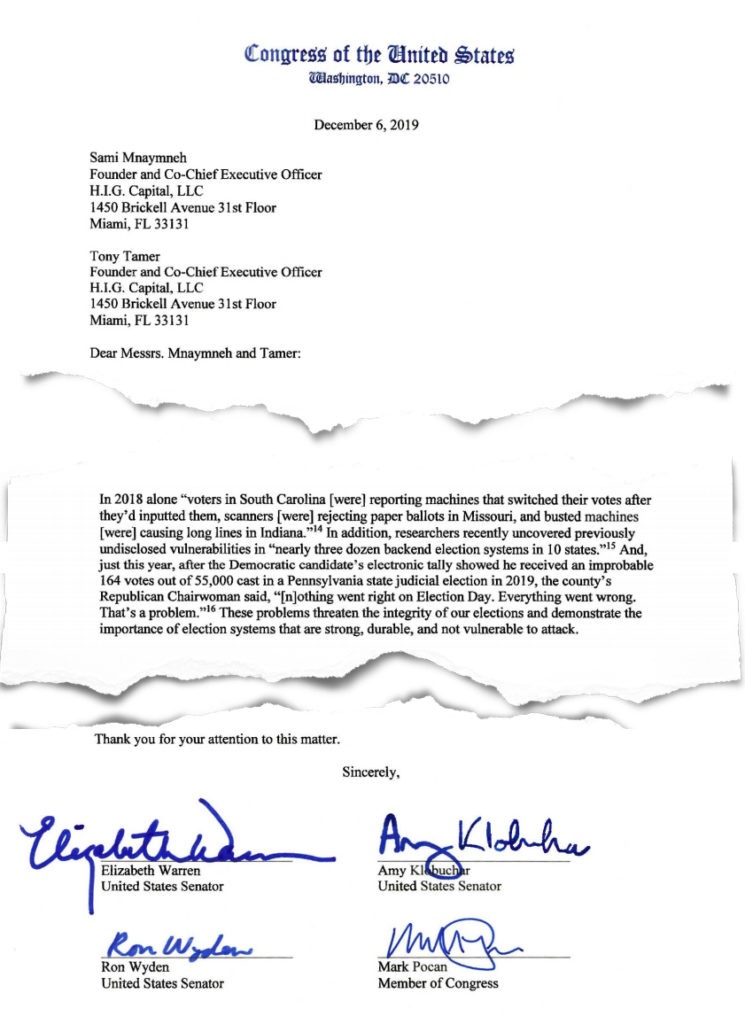 “These problems threaten the integrity of our elections and demonstrate the importance of election systems that are strong, durable, and not vulnerable to attack,” the Senators insisted in their letter.

Today, Dominion Voting Services machines and software is flipping votes from Republican candidates to Democrat candidates, including enough flipped votes to alter the presidential race between President Trump and Democrat challenger Joe Biden. Yet, there is a deafening silence from these three US Senators who just a year ago cried foul.

Critics of the three Senators were quick to point out their political opportunism, the hypocrisy of their silence, and how they are copasetic with election fraud when it benefits their candidates.