Democrats Push To Eradicate Right-Wingers From The Military

Democrats Push To Eradicate Right-Wingers From The Military

This Does Not Signal Strength on the World Stage

The Biden administration’s Defense Secretary Lloyd Austin has ordered every military branch to convene a “stand down” sometime in the next 60 days to “have a deeper conversation” about the supposed threat of white supremacist “extremism” in the U.S. military, while a top Democrat wants the Biden administration to monitor new recruits for any “violent-extremist ties,” whatever that means. Active Special Forces are reportedly being told not to associate themselves with the beloved Pepe the Frog meme or the patriotic Three Percenters.

“There may be cultural issues we have to deal with here,” Pentagon spokesman John Kirby said after Austin met with top military leaders and apparently found consensus among all of them that there was some kind of extremism “problem” in the military.

Some leftists want to ban Fox News from military bases, according to the replies on Secretary Austin’s tweet announcing the Stand Down. Replies included, “End the practice of Fox being on constantly in every military base. It’s nothing but lies and propaganda and serves as a gateway to further radicalization,” and
“It is common knowledge Fox News on all bases is the tool being used to indoctrinate our military.”

“In addition to calling on President Biden to issue an executive order identifying white supremacy and violent extremism as a critical threat that must be considered as part of the security clearance adjudication process and directing all relevant agencies to update the background investigation process to incorporate a review of social media information to identify white-supremacist or violent-extremist ties, the letter also calls on Secretary Austin to direct the military services to establish procedures to review the social media activity of recruits as part of the accessions process, including the development of guidance to assist recruiters in identifying extremist groups and activities,” Speier’s office wrote in a press release.

This marks yet another move by military brass to target political conservatives in the service. Clearly, the globalist politicians want a military comprised of leftist Regime servants who will not question their orders, such as being sent to guard the U.S. Capitol in a melodramatic show of force after some patriots went into the Capitol waving flags. That so-called “insurrection” is being used as pretext to roll out sweeping changes to our society, including the banning of President Trump from Twitter while he was still in office and possibly a massive new domestic terrorism legislative package that Biden could sign into law.

As military leadership becomes more left-wing and globalist, the people in the military who get promoted are also increasingly left-wing. Some politicians like Transportation Secretary Pete Buttigieg and Cal Cunningham emerge from the military ready to join the fight for left-wing policies in domestic American politics.

“Today, I met with senior leaders to discuss extremism in the military. As a first step, I’m ordering a stand down to occur over the next 60 days so each service, each command and each unit can have a deeper conversation about this issue. It comes down to leadership. Everyone’s,” stated Defense Secretary Lloyd J. Austin, tweeting the following image: 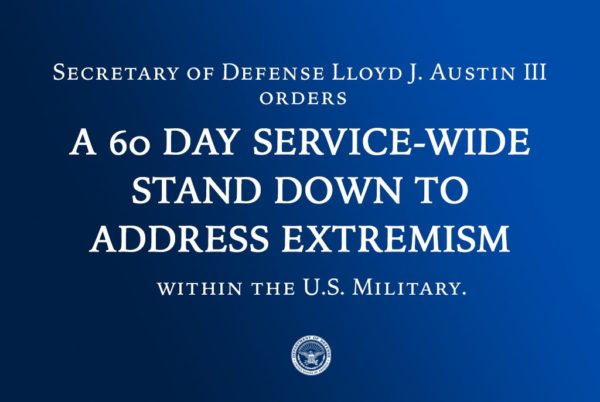