Mailers paid for by the Democratic Party of Virginia tie Jarome Bell to President Trump...VA-2 is R +5

by Frankie Stockes
in 2022, Politics, The Swamp

Democrats are backing establishment Republican Jen Kiggans just ahead of the GOP primary in Virginia’s 2nd Congressional District, where Kiggans will face Jarome Bell at the top of the GOP field for Congress. The winner will take on Pelosi ally and 1/6 Committee member Elaine Luria this November, one of the nation’s most vulnerable Democrat incumbents.

With the 2nd District’s GOP Primary slated for June 21st, mailers funded by the Democratic Party of Virginia have started going out all over the region, attacking Jarome Bell and his ties to 45th President Donald J. Trump and the MAGA movement. While Bell has been an outspoken supporter of America First conservatism, his establishment-backed opponent, Jen Kiggans, has refused to support a Trump run for President in 2024 and wouldn’t even utter Trump’s name in a recent radio interview.

Now, just weeks ahead of primary day, the Democratic Party of Virginia is funding anti-Jarome Bell mailers going out around the 2nd District, effectively throwing their support behind Jen Kiggans as the GOP nominee to take on Democrat incumbent Elaine Luria.

Notably, Virginia does not register voters by party and holds open primaries, allowing Democrat crossover voters to participate in GOP primaries and vice versa. That strategy has reportedly been employed by Democrats in open primary races on numerous occasions, to the benefit of the establishment Republicans they’d rather face off against in a general election when given the choice.

“Let’s be clear, Navy veteran Jarome Bell would just be a rubber stamp for Trump,” the Democrat mailer reads, alongside a doctored graphic of Bell and President Trump wearing the iconic “Make America Great Again” cap. Just beneath the “rubber stamp” caption, the mailer goes on to slam Bell for being endorsed by top-level MAGA movement champions, General Mike Flynn and Trump ICE Director Tom Homan.

When the mailer is flipped over, the opposite side again portrays Bell and Trump side by side in MAGA caps, this time attacking Bell for his support of election integrity.

“Bell is dangerously casting doubts about the 2020 elections,” the mailer reads, attacking Bell’s election integrity activism and quoting from a Newsweek headline on his support for election audits nationwide.

“Pro-Trump Congressional Candidate Says Audit All 50 States,” the Newsweek quote reads, ahead of more Democrat talking points about Jarome Bell being a “rubber stamp” for the America First agenda.

See the Democrat mailers below: 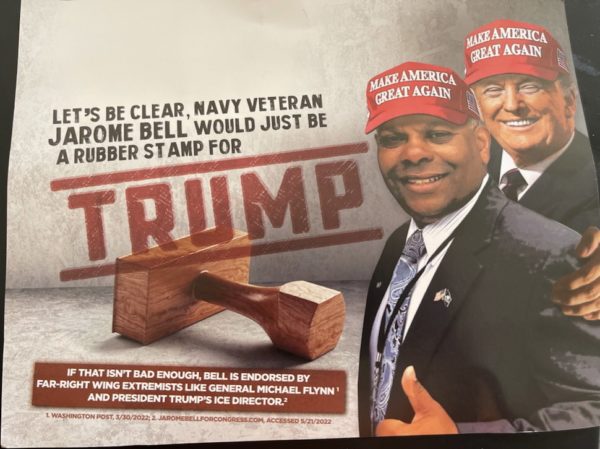 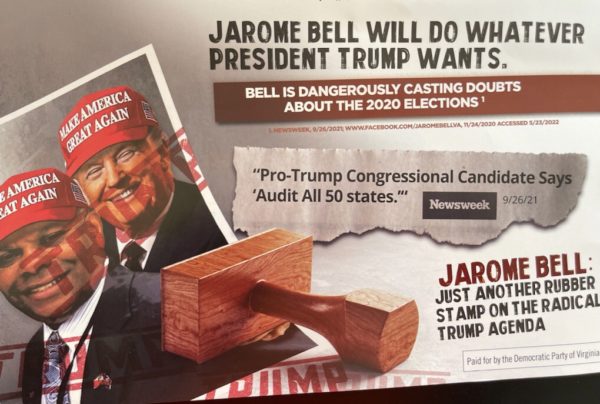