Democrat Mayor Tells Young Children to ‘Slide Into’ Her DMs

Democrat Mayor Tells Young Children to ‘Slide Into’ Her DMs

Stacy Phillips, who currently serves as Mayor Pro Tem of Huntersville, NC, told children to “slide into” her DMs if they live in a “don’t say gay state.” After backlash, Phillips deleted the tweet and locked her Twitter account. 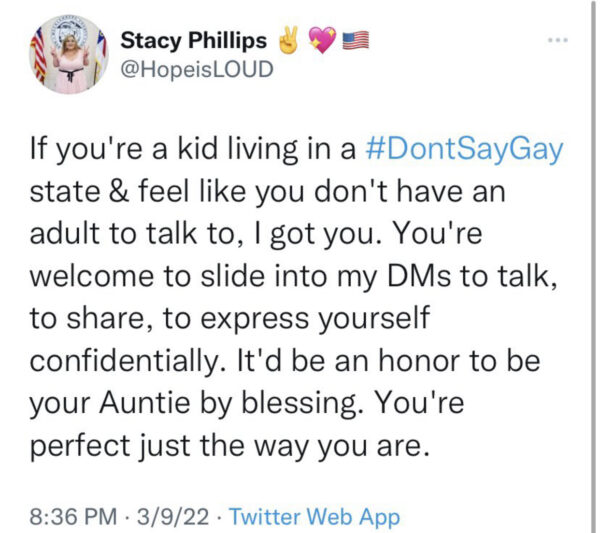 “If you’re a kid living in a ‘DontSayGay’ state and feel like you don’t have an adult to talk to, I got you,” Phillips wrote. “You’re welcome to slide into my DMs to talk, to share, to express yourself confidently. It’d be an honor to be your auntie by blessing. You’re perfect just the way you are.”

The tweet did not stay up long and was quickly panned by the popular “Libs of TikTok” account, which replied with “Ok groomer.”

The quickly deleted tweet was referencing Florida’s HB 1557 legislation, which bans the teaching of same-sex education to children in grades K-3. Democrats refer to the law as the “don’t say gay” bill, however, and have accused Florida Republicans of “discrimination.”

President Biden has called the parental rights bill “hateful”, as has White House Press Secretary Jen Psaki. “Why are Florida leaders deciding they need to discriminate against kids who are members of the LGBTQI+ community?” Psaki asked reporters on Wednesday. Psaki later questioned whether it was “meanness” that prompted Florida Republicans to ban the teaching of same-sex content to young children. “What prompts them to do that? Is it meanness? Is it wanting to make kids have more difficult times in school?”

Christina Pushaw, who currently serves as press secretary for Florida Governor Ron DeSantis, pushed back at false claims from Democrats and referred to HB 1557 as “anti-grooming legislation,” in a tweet. “The bill that liberals inaccurately call ‘Don’t Say Gay’ would be more accurately described as an Anti-Grooming Bill,” Pushaw wrote in a Twitter thread. “The bill has nothing to do with LGBTQ people. You invented that angle when you falsely called it ‘Don’t say gay’ despite the fact that the word ‘gay’ isn’t in the bill. Now, why do you think it’s appropriate to teach 3-8 year olds about sex?”

The bill is currently awaiting the signature of Governor DeSantis.