Delaware Rep. John Kowalko told a conservative named “C-Dawg Rowe” that Rowe and his fellow gun supporters should kill themselves. The Facebook conversation was about masks. Of course, Kowalko — who represents Newark — is in favor of slave masks. Kowalko has apologized in the past for his profane and hateful use of social media.

“I’ve got a suggestion for you and your fellow gun worshipers (sic),” Kowalko stated to C-Dawg Rowe. “Instead of wearing a mask stick the barrel of your piece in your mouth. Maybe those 14 children killed in Texas would have been safer from the virus and you psycho, small-penis gun fondlers.” 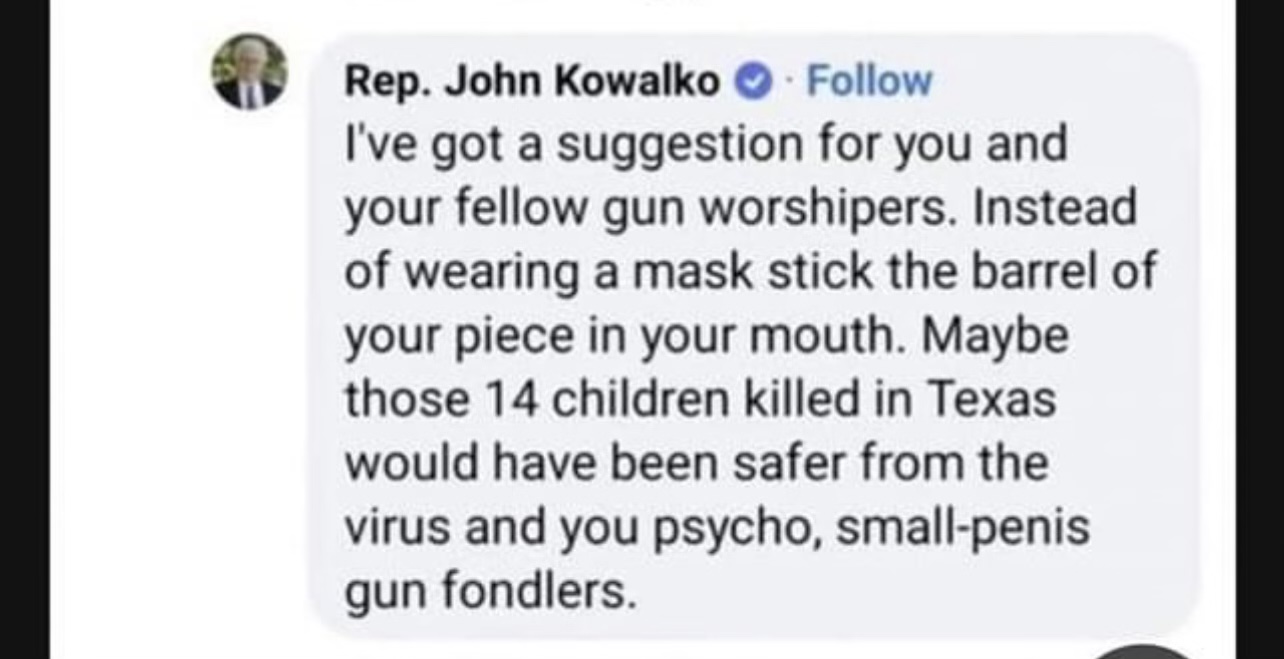 In January 2020, John Kowalko penned a profanity-laced tirade over Delaware’s minimum wage. The New Years day email targeted his Republican opponents, as well as fellow Delaware Democrats who are not sufficiently progressive for Kowalko.

“Eff all the R’s and D’s that voted for [Republican State Rep. Mike] Ramone’s ‘training wage’ and ‘young person’ wage exemptions to the minimum wage bill,” Kowalko wrote. “Eff the House Speaker for not getting Kim Williams’ and my bill to repeal Ramone’s exemptions out of committee and on the floor for a vote. Eff Speaker Pete [Schwartzkopf] and his unadulterated lie (personally to my face) that we had made some kind of promise to the Republicans in order to get their vote on the Bond Bill two years ago (an absolute, unadulterated lie).”

The email, which was triggered by a minimum wage hike in neighboring New Jersey, ended with: “Oh, by the way have a Happy New Year all of you selfish bastards out there.”

John Kowalko, who has been in office since 2006, is retiring at the end of his term.