An assistant principal with Washington, DC Public Schools took an in-person job at a school in Rhode Island during DC’s lengthy COVID shutdown, remaining employed with DC and claiming to be working from home as he led a double life at his new Rhode Island school. The bizarre story has outraged taxpayers, especially parents, who alongside their children bore the brunt of school shutdown side effects as teachers and administrators fought to keep their doors closed.

According to the findings of the DC Board of Ethics and Government Accountability, Kramer Middle School’s now-former assistant principal, Michael Redmond, held a second job at a school hundreds of miles away as he took advantage of DC Public Schools’ prolonged 2020 shutdown.

While “working from home” as the assistant principal of Kramer Middle School, Redmond was actually reporting to work in-person at Providence, Rhode Islands’s E-Cubed High School, where he had accepted the position of principal.

Redmond reportedly took the job with Providence Public Schools in July of 2020, with a Facebook post from the district announcing his arrival, and hailing his work in the nation’s capital, which has one of the worst public school systems in the United States. Though when Redmond took the position, he never resigned from his post in DC, apparently realizing that he could collect a 6-figure salary from both school districts at once, as long as DC  students were still going to school online. 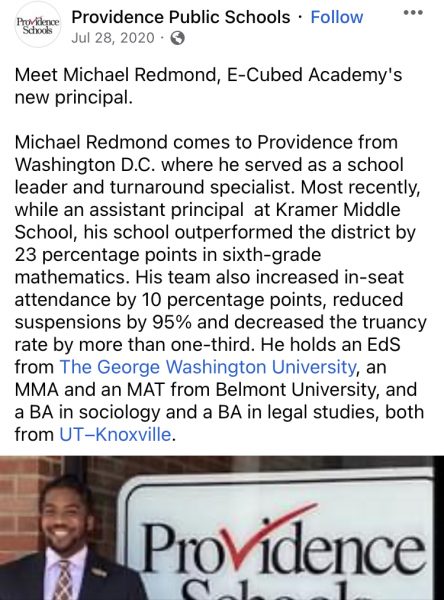 When fall rolled around and schools in Providence began opening their doors, DC remained closed, largely at the behest of unionized teachers and school administrators who had taken a liking to “working” from home.

Redmond would report to work in person at his new E-Cubed Academy job and while there, help manage things at DC’s Kramer Middle School remotely, leading to serious questions about the actual workloads and inflated salaries of many public school employees.

DC Public Schools were reportedly alerted to the scam at some point in the fall of 2020 and began an investigation immediately.

According to local media reports in Providence and DC, Redmond is no longer employed with either school district. Washington, DC’s ethics board has accused him of violating numerous ethics codes and says he will face an ethics hearing which could lead to major fines.

It is unclear if he is also facing ethics violations in Rhode Island, or if any criminal charges will be filed in the case once the ethics board is done.