Nikolai Mushegian, 29, was found dead on a Puerto Rico beach a few hours after a cryptic tweet.

by Paul Aubert
in News

A young crypto developer and millionaire was found dead just hours after making disturbing comments about the CIA, Mossad, and pedophile elites on Twitter.

Nikolai Mushegian, a prominent figure in the cryptocurrency world, claimed intelligence agencies like the CIA and Mossad were operating a “sex trafficking entrapment blackmail ring” in the Caribbean.

“CIA and Mossad and pedo elite are running some kind of sex trafficking entrapment blackmail ring out of Puerto Rico and caribbean islands. They are going to frame me with a laptop planted by my ex gf who was a spy. They will torture me to death,” Mushegian posted to Twitter on October 28 at 4:57 AM. 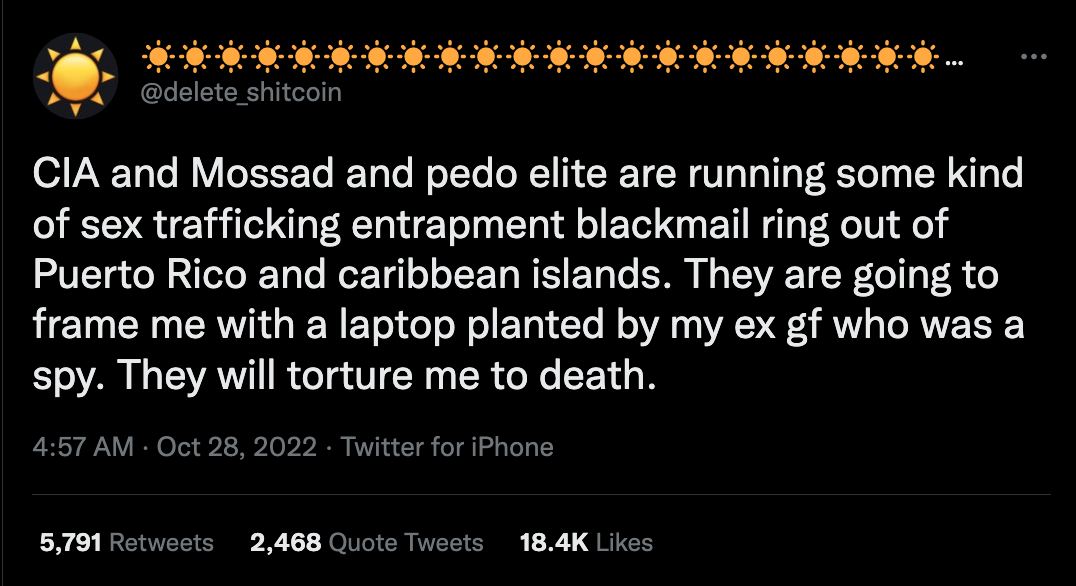 Mushegian reportedly went for a walk on the beach in San Juan, Puerto Rico and his lifeless body was found, fully clothed with his wallet on him, around 9:00 AM, around 5 hours after his tweet.

Mushegian’s sudden death has raised ears across social media and the cryptocurrency community.

Ameen Soleimani, the CEO and developer at Spankchain, a cryptocurrency processing company, took to Twitter to suggest Mushegian was murdered.

“yea so Nikolai is still F****G DEAD my money is on him being murdered he was found drowned 4 hours after his riskiest tweet ever he had all year to drown randomly or be mugged, so it seems unlikely that his death was unrelated to his tweet…” Soleimani commented on Twitter. 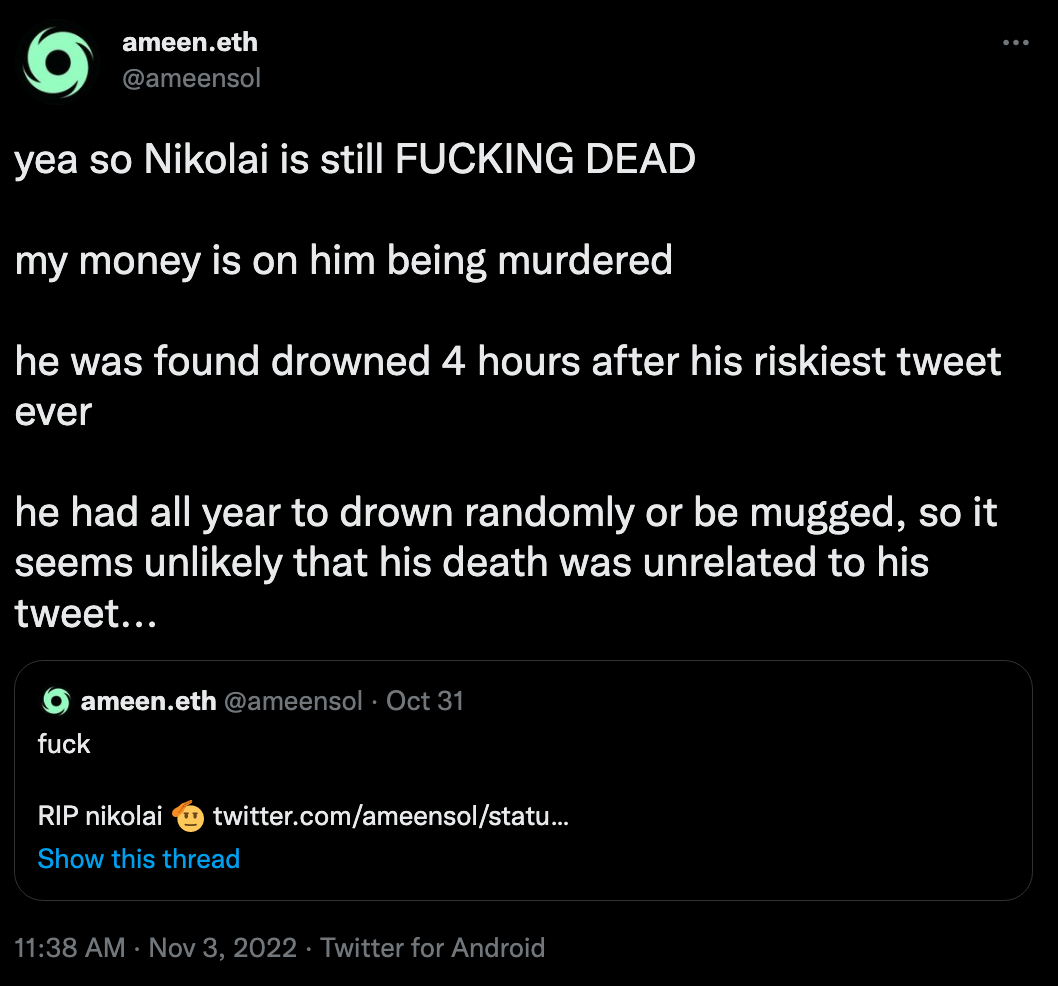 “given that Nikolai implicated the CIA and Mossad, his murderers are likely connected at the highest levels it is a consensus view amongst crypto elites that Mossad was probably running Epstein as a sex trafficking blackmail scheme to entrap US politicians and businessmen…” Soleimani continued. 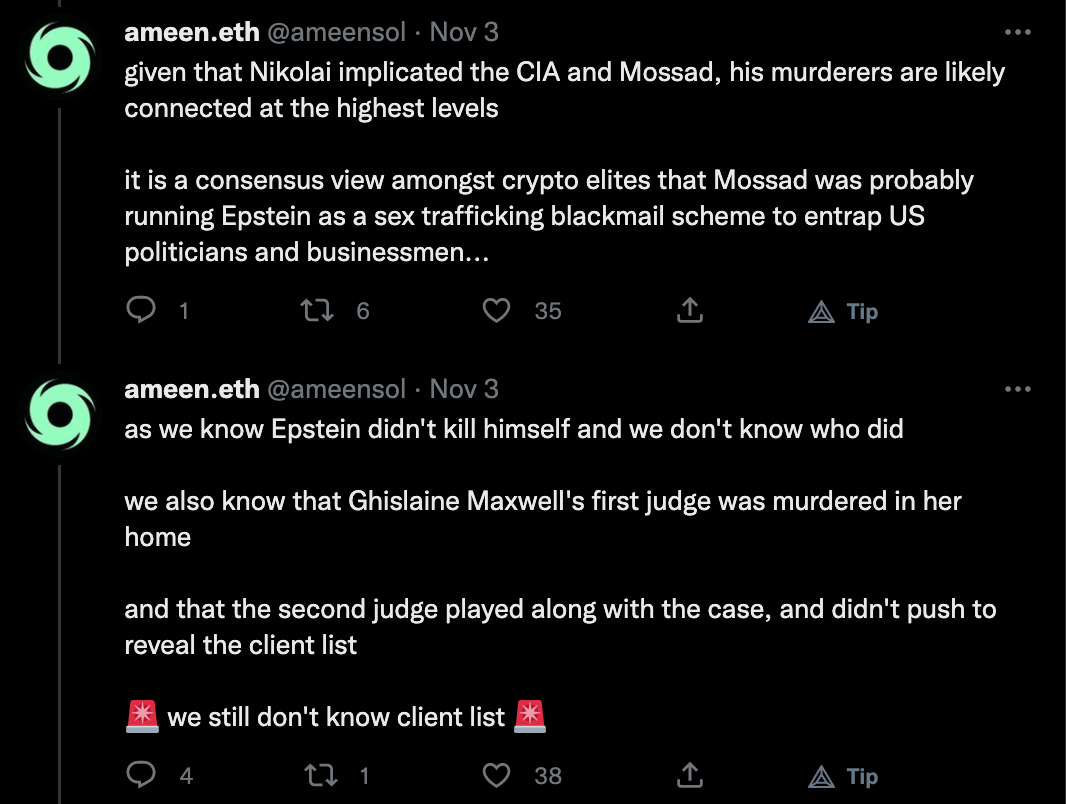 The FTX scandal has sent shockwaves through the crypto community. FTX founder and CEO Sam Bankman-Fried reportedly lost his entire net worth over night.

Bloomberg terminals reported his net worth plummeted from $16.2 billion earlier this year to an estimated $3.00 total.

FTX and Bankman-Fried were based in the Carribean, which is where Mushegian predicted intelligence agencies were running a trafficking blackmail ring out of.

Twitter users suggested Mushegian’s death being so close in time to FTX’s bankruptcy is more than a coincidence.

“Rumors swirling Nikolai Mushegian death previously reported on this platform is in relation to threats Nikolai would expose #FTX insolvency and involvement in pedo sex ring. Rumors SBF used same tactic to extort Justin Sun into providing $1B in liquidity to #FTX. #CRAZY” a cryptocurrency influencer tweeted to his 78k followers.

Rumors swirling Nikolai Mushegian death previously reported on this platform is in relation to threats Nikolai would expose #FTX insolvency and involvement in pedo sex ring.

Over the course of the 2022 midterm cycle, the 30-year-old donated over $40 million to Democrat-aligned PACs. Bankman-Fried once pledged to give $1 billion to help Democrat candidates up through 2024. However, in October, he told Politico that number would be closer to $100 million.

George Soros and Bankman-Fried were the Democrat’s top individual donors.

In April and May, the FTX CEO held lobbying meetings with Steve Riccheti, a top Biden adviser. These meetings come after the crypto CEO donated %5.2 million to Biden’s 2020 campaign.

Bankman-Fried’s massive Democrat donations and close association with the Biden administration have raised suspicions of corruption.