The National Treasurer of the College Republican National Committee (CRNC) has repeatedly attacked President Trump on Twitter and liked a tweet that appeared to urge the end of the Trump presidency.

Screenshots provided to the National File of Ty Seymour’s Twitter page feature a plethora of anti-Trump posts, with the most recent being a tweet where he writes, “In a world of Trumps, be a Murkowski.”

The tweet is in reference to the admission by Sen. Lisa Murkowski (R-AK) that she is “struggling” on whether to support Trump in 2020, after refusing to back Trump’s candidacy in 2016. The President has since called for a primary challenge against Murkowski when she is expected to run for re-election to the Senate in 2022.

Seymour was elected to his position in 2019, after serving as the CRNC’s Northeast Regional Vice Chair and the state chair of the Connecticut Federation of College Republicans. Although the CRNC is the official student wing of the Republican Party, it remains controlled by a clique of Never Trumpers allied with liberal northeastern politicians such as Gov. Charlie Baker (R-MA) and Gov. Phil Scott (R-VT).

In the past, CRNC Executive Director Ben Rajadurai has made a number of anti-Trump remarks, even after Trump received the 2016 Republican presidential nomination.

However, the remarks by Seymour appear to go much further than Rajadurai, who has toned down his criticism of the President since Trump took office.

Mike Rider, whose Twitter bio describes him as a member of the Meriden Democratic Town Committee, replied to Seymour’s tweet about Trump and Murkowski.

“Hopefully this circus will come to an end soon,” Rider wrote.

Shockingly, Seymour liked the tweet by a Democrat calling for the end of the Trump presidency.

Seymour has vocally agitated against the President, retweeting a tweet by Rep. Justin Amash (L-MI) stating that “Donald Trump is a threat to our liberty, our Constitution and our rule of law.” Amash left the Republican Party last year in opposition to Trump, and has since joined the Libertarian Party.

In other tweets, Seymour mocks White House Press Secretary Kayleigh McEnany’s claim that President Trump is “hard at work” as “laughable”, and describes Trump as the “divider-in-chief”. 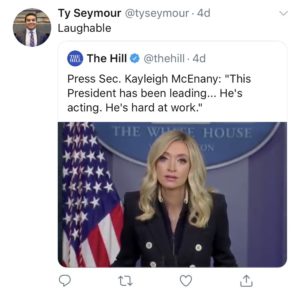 “If the National Treasurer of the CRNC is saying these things, we need a new National board!” wrote the Iowa State College Republicans on Twitter.

“This guy is the treasurer of the CRNC. They are the official student wing of the Republican party. Attacking our President on the GOP’s dime,” added Gavin Wax, a member of the Young Republican National Federation (YRNF) board. “Should we allow this to continue?”

Given Trump’s status as the de facto leader of the Republican Party, having an overt member of the anti-Trump Resistance at the top level of the party’s official student wing just months from the November presidential election is likely to be extremely detrimental to the party’s youth outreach efforts.

This conduct is far from new for the CRNC, however. In 2016, its then-national chair, Alex Smith, denounced Trump a month out from the election, stating that she was “not with him”.