The Chinese government is taking their social surveillance to the next level. Through the combining of all sorts of surveillance technologies such as facial recognition cameras, face and fingerprint database. Once this technology is functional, it can be used to identify a person as they walk down the street as well as who they are on their way to see. The Chinese claim will use this to try to detect and weed out Communist Party members.

While the United States and other governments use some of these technologies to identify and track terrorists, China is suggesting that this should be implemented for use in total population monitoring. Chinese authorities store  millions of individuals information on servers that are “unprotected by even basic security measures,” according to the New York Times.

The security of these servers, or lack there of causes great deal for worry among China’s civilians because of the unfiltered accesses provided for this information to private contractors and middlemen for law enforcement. The surveillance itself is controlled by local police stations acting as independent personal versions of National Security Agencies on the general population. 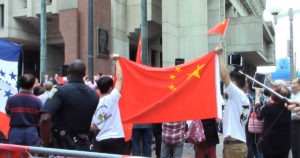 This ultra-surveillance system upgrade had empowered Chinese Police Officers to track not only criminals, but “online malcontents,” anyone who shows any sympathy for the protestors in Hong Kong or critical of the Chinese Police, or just anyone they arbitrarily decide needs to be watched.

“Each persons data forms trail. It can be used by the government and it can be used by bosses at big companies to track us,” says a technology worker committed to raising awareness on these policies despite the objections of the Chinese government. “Our lives are worth about as much as dirt.”

The individual aspects of this technology is nothing more advanced than anything we have here in the United States, and with the recent push towards a global nanny state, it wouldn’t be a stretch to see politicians, and maybe even citizens of this country start to seek out this level of surveillance in our society.