CHINA: SolarWinds Board Director ‘Led The Establishment’ Of $75 Billion Investment Firm Into China

CHINA: SolarWinds Board Director ‘Led The Establishment’ Of $75 Billion Investment Firm Into China

Kenneth Hao, who serves on the board of SolarWinds, "led the establishment" of Silver Lake into China.

by Archive
in China, News, The Swamp

SolarWinds, the major technology company that was recently victim to an unprecedented hack, shares a board member Kenneth Hao with Silver Lake. Hao was responsible for leading “the establishment” of the $75 billion private equity firm into China.

Kenneth Hao serves on the Board of Directors at SolarWinds. He also serves as the Managing Partner and Managing Director at Silver Lake.

According to his SolarWinds bio, “Hao has served on our board of directors since February 2016.” The biography also identifies Hao as the “Managing Partner and Managing Director of Silver Lake, which he joined in 2000.” This is reflected on Silver Lake’s website as well. 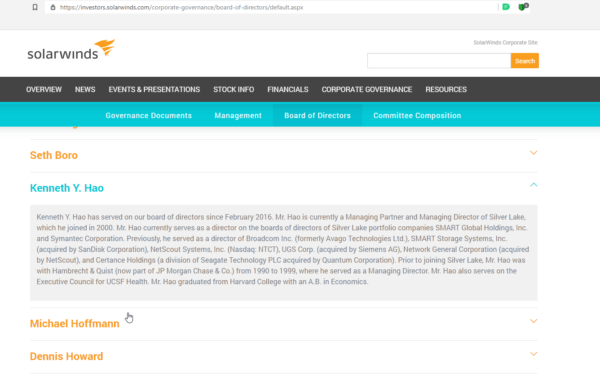 According to the Washington Post, SolarWinds investors traded a total of $280 million in stock before the official announcement of the breach, raising questions about potential insider trading. Silver Lake sold $158 million in SolarWinds shares six days before the SolarWinds breach was announced.

“Silver Lake, a Silicon Valley investor with a history of high-profile tech deals including Airbnb, Dell and Twitter, sold $158 million in shares of SolarWinds on Dec. 7 — six days before news of the breach became public. Thoma Bravo, a San Francisco-based private equity firm, also sold $128 million of its shares in SolarWinds on Dec. 7,” reported the Post.

This comes as the FBI, CISA, and ODNI released a joint statement outlining how the agencies have become aware of a “cybersecurity campaign” against the United States, issuing an Emergency Directive that instructed federal civilian agencies to disconnect or power down affected SolarWinds Orion products from their networks due to exploitation from “malicious actors,” as National File reported.

“If the federal government can prove that China, or any other foreign actors, successfully interfered with the election, President Donald Trump would have justification to utilize his 2018 Executive Order on foreign interference in US elections, to address the evidence of widespread voter fraud in the 2020 US election,” National File reported.

While the official report on foreign election interference has been delayed reportedly due to new intelligence surrounding Chinese operations information, DNI John Ratcliffe confirmed on CBS News that China, Russia, and Iran interfered in the 2020 election.

National File will continue to investigate As SolarWinds’ ties to Dominion Voting Systems and China come to light in the aftermath of this devastating hack.