Timestamps and text messages debunk the idea that Fulton County had to stop counting votes for an extended period of time at Atlanta’s State Farm Arena on Election Day.

Fulton County claimed that a burst water main in the arena led to a four-hour delay in counting votes, and that “Pipe-Gate” somehow necessitated days of additional time for vote-counting even though none of the ballots got wet.

State Farm Arena claimed in its statement that the leak occurred at 6:07 AM, and that “Within 2 hours, repairs were complete.”

But State Farm Arena did not tweet its statement about the incident until 9:19 PM ET. With President Trump in the lead in Georgia, all of a sudden the notoriously pro-Democrat pro-Stacey Abrams Fulton County had to stretch out its vote-counting.

Let me repeat. Fulton County elections officials told the media and our observers that they were shutting down the tabulation center at State Farm Arena at 10:30 p.m. on election night only to continue counting ballots in secret until 1:00 a.m.

A public records request led to the exposure of a text message by Atlanta Hawks vice president of facilities Geoffrey Stiles claiming the story was exaggerated: 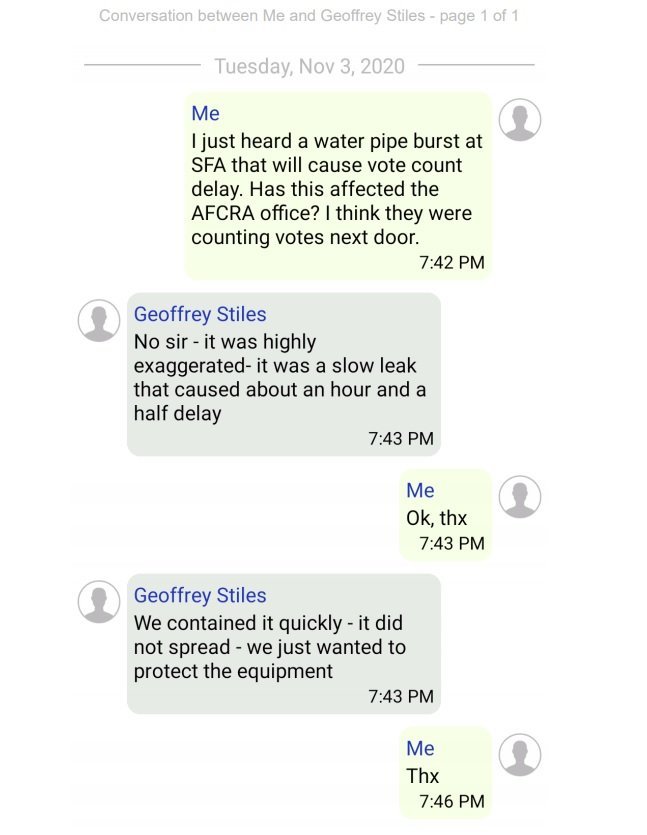 © 2022 NationalFile.com National File, LLC. Privacy. Corrections. About Us. All Rights Reserved.
Have any questions or suggestions? If you are having difficulty unsubscribing from our mail subscription please send an email here [email protected] Want to advertise with us? Please email: [email protected]ionalfile.com