"They don’t want the United States or World to see what is going on with our corrupt, third world election," wrote President Trump.

President Donald Trump issued a statement after it was reported that up to 17.5% of the ballots in Maricopa County, Arizona do not match the totals provided to auditors by the Maricopa County election officials. In the statement, President Trump slammed the election as “corrupt” and from the “third world.”

“A devastating letter written by Arizona Senate President Karen Fann on voting irregularities, and probably fraud, in Maricopa County during the 2020 Presidential Election. Even the database was illegally deleted after the subpoena to produce the information,” wrote President Trump, referring to the letter where it was revealed that there was a 17.5% discrepancy in the number of ballots provided versus the number of ballots listed in at least one instance. “Senate President Fann has invited Maricopa County officials to a public hearing on May 18 to allow them the opportunity to try to explain what happened to the missing databases, ballots, and other significant issues.”

President Trump added, “The Fake News and Lamestream Media is doing everything they can not to cover this major story. They just refuse to talk or report about it. They don’t want the United States or World to see what is going on with our corrupt, third world election.” President Trump also added a link to the letter written by Senate President Karen Fann. 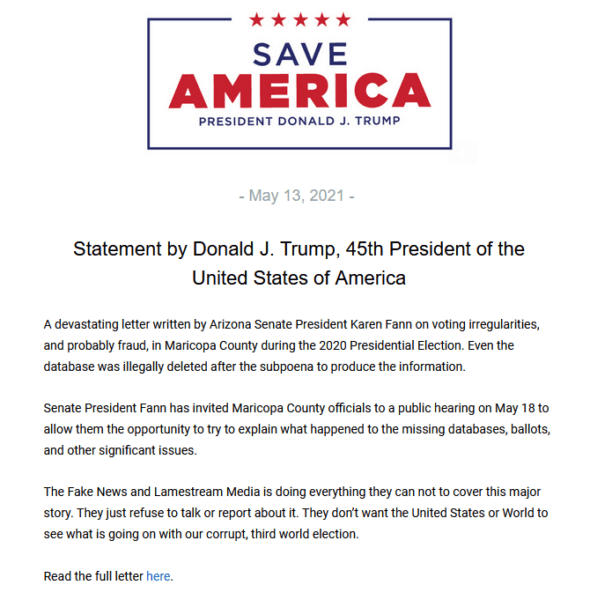 “We now know why the Maricopa County Board of Supervisors have been fighting this subpoena so hard, why Perkins Coie has come in, why the Democrats are pushing back, why you’ve got mainstream media melting down,” he explained, “Because they’re hiding this. They’re hiding the disaster in which they handled this election, and likely, the fact that Joe Biden did not win in Arizona.” (READ MORE: Mark Kelly Hires Perkins Coie To Sue National File, Here’s How You Can Help)

President Trump also referred to the directory full of election databases deleted by Maricopa County officials, while under subpoena, only days before the electronic equipment was delivered to the Arizona auditors. The official Maricopa Arizona Audit Twitter account, controlled by former Arizona Secretary of State Ken Bennett, said this constitutes “spoliation of evidence.”