Moments ago, 45th President Donald Trump issued an open letter to establishment Texas Gov. Greg Abbott, highlighting his lack of interest when it comes to the nationwide fight for election integrity and demanding that – as the top Republican in the state – he take an active role in advancing legislation to make elections more secure in the state where voter fraud allegations run rampant.

“Dear Governor Abbott,” President Trump began, “Despite my big win in Texas, I hear Texans want an election audit! You know your fellow Texans have big questions about the November 2020 Election. Bills to audit elections in your great state’s House and Senate were considered during Texas’ Second Special Session. Instead, the legislature passed a watered-down amendment that doesn’t even apply to the 2020 Presidential Election. This short amendment doesn’t answer the questions Texans have about the last election. Texans demand a real audit to completely address their concerns.”

President Trump added, “We need HB 16, which was just filed in the Third Special Session. This legislation specifically addresses the 2020 Presidential Election, and enables audits for future elections. The bill creates a process for candidates and party chairs to initiate an audit, and uses the same language as SB 97, which already passed the Texas State Senate, but did not have enough time to make it through the House during the Second Special Session.”

Establishment Republicans in Texas originally reclaimed that the 2021 legislative session was the “most conservative in history” despite ignoring or failing to advance legislation on virtually every conservative issue supported by the Republican base. Abbott remained silent on election integrity, the gender mutilation of children, and border integrity. After receiving push back from the Republican base, Abbott called a second special session. Now, Abbott has called a third special session, though some still say it is not enough.

“Texas needs you to act now,” wrote President Trump. “Your Third Special Session is the perfect, and maybe last, opportunity to pass this audit bill. Time is running out. Paper ballots in your state are only kept for 22 months after the election. Your citizens don’t trust the election system, and they want your leadership on this issue, which is the number one thing they care about. It is their most important issue—one that will affect 2022 and 2024.”

The 45th President added, “Governor Abbott, we need a “Forensic Audit of the 2020 Election” added to the call. We’re quickly running out of time and it must be done this week. Texans know voting fraud occurred in some of their counties. Let’s get to the bottom of the 2020 Presidential Election Scam!” 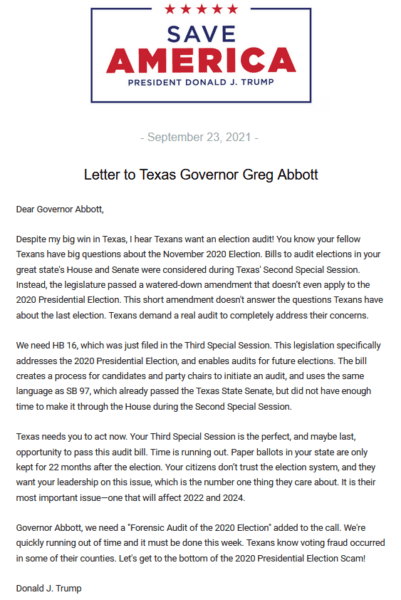 National File Senior Reporter Patrick Howley been instrumental in exposing what many have declared to be a world-class voter fraud operation happening in Harris County, Texas, the seat of Houston, one of the nation’s largest city.

Last year, the county instituted 24/7 drive thru voting, even as the FBI began investigating reports of election irregularity in the county. Nursing homes also received mail-in ballots in large numbers, despite video that appears to show ballot harvesters targeting elderly people in nursing homes and forcing them to vote for Democrat candidates under duress. Last month, despite pressure from his own party, a black Democrat operative blew the whistle on what he identified as massive voter fraud within the county.

Abbott has remained completely silent on these issues.