BREAKING: Trump Congratulates Missouri Gov For Pardoning McCloskeys, Who Defended Themselves From BLM With Guns

BREAKING: Trump Congratulates Missouri Gov For Pardoning McCloskeys, Who Defended Themselves From BLM With Guns

45th President Donald Trump issued a statement congratulating Missouri Gov. Mike Parson, a Republican, for having the courage to pardon U.S. Senate candidate Mark McCloskey and his wife. The McCloskeys gained national fame last year, when they used firearms to defend their home from a trespassing mob of Black Lives Matter protesters during the heat of the George Floyd-inspired riots that gripped America for much of 2020.

“Congratulations to Governor Mike Parson of Missouri for having the courage to give Mr. and Mrs. Mark McCloskey a full pardon,” wrote President Donald Trump earlier today. “They were defending their property and if they had not done what they did, their property would have been completely destroyed and they would have been badly beaten, or dead—great going Mike!” Parson pardoned the McCloskey family earlier this month, and the couple is now suing to regain rightful ownership of their confiscated firearms. 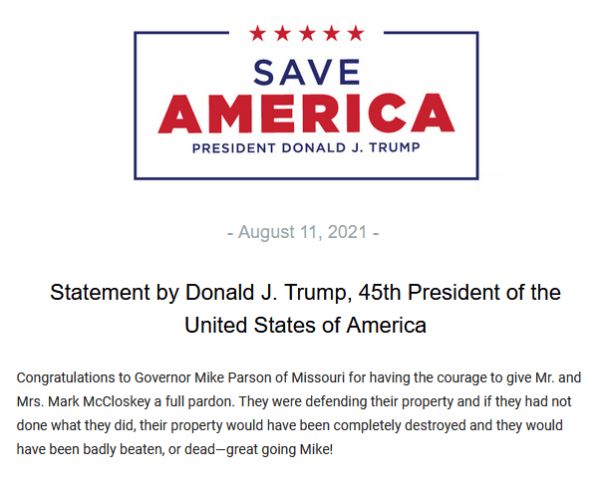 Even prior to Mark McCloskey’s decision to run for U.S. Senate was publicly announced, the two took their newfound fame in stride. In September of last year, the couple was confronted by a Black Lives Matter agitator, who harangued them in public as they entered their vehicle. In response, Mark McCloskey gave the man a signed copy of the viral photo of the couple using their firearms to defend their property and said, “Here, have a nice souvenir!” (READ MORE: Mark McCloskey Talks About 2022 Senate Run [Exclusive])

President Trump reportedly shot back, “How do you think this looks to hostile countries?” According to reports, Milley then told President Trump that “Mr. President, it doesn’t compare anywhere to the summer of sixty-eight. It’s not even close,” at which point President Trump responded, “You’re all f**ked up. Every one of you is f**ked up.” Trump then looked directly at Vice President Mike Pence, and stated, “Including you!”

Perhaps suggesting a political disagreement within the wider Trump family, this may indicate President Trump’s support for Mark McCloskey’s run for U.S. Senate, even though Kimberly Guilfoyle, the love interest of Donald Trump Jr., is working on behalf of disgraced former Missouri Governor Eric Greitens’ bid for U.S. Senate. President Trump has reportedly expressed frustration at Giulfoyle’s decision to throw in with the disgraced former governor.