Video: Biden Says Drivers Will Pay More for Gas ‘As Long As It Takes’

45th President Donald Trump added more fuel to the flames of his feud with Senate Minority Leader Mitch McConnell in a statement released today that focused, on the surface, on the admission from the Wall Street Journal that virtually every poll was wildly separate from reality in 2020, but also blamed McConnell’s inaction for his loss of the White House.

“Wall Street Journal has reported (they finally got something right), that 2020 was the ‘Worst Presidential Poll Miss in 40 Years.’ The public opinion surveys ahead of the 2020 Presidential Election were the most inaccurate ever, according to a major polling panel. This was done purposely. The polls were a joke. I won States in a landslide that I was predicted to lose days before the election,” wrote President Trump. “Other states had me purposely so far down that it would force people, even fans, to say ‘Let’s stay home Darling. We love our President, but he can’t win.’ And then I would win those states or at least come very close.”

He added, “In one state that I actually won, but the results were rigged, ABC and the Washington Post had me down by 17 points. Even the rigged final result was extremely close. It’s called SUPPRESSION POLLING and it should be illegal. These are crooked, disgusting, and very dishonest media outlets and they know exactly what they are doing.”

Then, President Trump turned his attention on members of the Republican Party who publicly turned against him as he disputed the widely criticized Electoral College votes cast on January 6, writing, “The 2020 Presidential Election was, by far, the greatest Election Fraud in the history of our Country. The good news is, the American people get it and the truth is rapidly coming out!”

“Had Mike Pence had the courage to send the Electoral College vote back to states for recertification, and had Mitch McConnell fought for us instead of being the weak and pathetic leader he is,” wrote President Trump, “we would right now have a Republican President who would be VETOING the horrific Socialistic Bills that are rapidly going through Congress, including Open Borders, High Taxes, Massive Regulations, and so much else!” 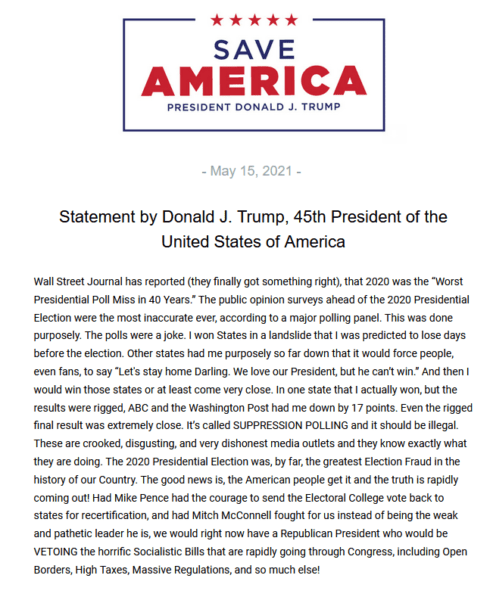 High profile Republicans, including Sen. Lindsey Graham, have publicly asked and privately begged President Trump to drop his ongoing feud with McConnell. Likewise, Pence has repeatedly touted his supposedly-close relationship with President Trump since leaving the White House, and many see this as laying the groundwork for Pence to run for President in 2024.