BREAKING: President Trump Releases Video On 20th Anniversary Of 9/11, ‘America Will Be Made Great Again’

BREAKING: President Trump Releases Video On 20th Anniversary Of 9/11, ‘America Will Be Made Great Again’

"This is the 20th year of this war, and should have been a year of victory, and honor, and strength. Instead, Joe Biden and his inept administration surrendered in defeat."

45th President Donald Trump released a video and accompanying statement on the 20th anniversary of the terrorist attacks on September 11, 2001. In the statement, President Trump recognized the sacrifices made by first responders on 9/11, and compared them to the recent loss of 13 United States servicemembers in Afghanistan.

“For the great people of our country, this is a very sad day. September 11 represents great sorrow for our country, many things were displayed that day, including more importantly the bravery of our police, fire, and first responders of every kind. They job they did was truly unbelievable, we love them and we thank them,” opened President Trump.

“It is also a sad time for the way our war on those that did such harm to our country ended last week. The loss of 13 great warriors and the many more who were wounded should never have happened,” the 45th president added, “Over all, 250 people were killed in Afghanistan last week, and so many more were seriously injured. We had $85 billion of the finest and most sophisticated military equipment taken from us without even a shot being fired. The leader of our country was made to look like a fool, and that can never be allowed to happen. It was caused by bad planning, incredible weakness, and leaders who truly didn’t understand what was happening.”

Expressing further scorn at Joe Biden’s handling of the Afghanistan withdrawal, President Trump added, “This is the 20th year of this war, and should have been a year of victory, and honor, and strength. Instead, Joe Biden and his inept administration surrendered in defeat. We will live on, but sadly our country will be wounded for a long period of time. We will struggle to recover from the embarrassment this incompetence has caused.” President Trump concluded with another indication that he intends to run for President in 2024: “Do not fear, however, America will be made great again.” 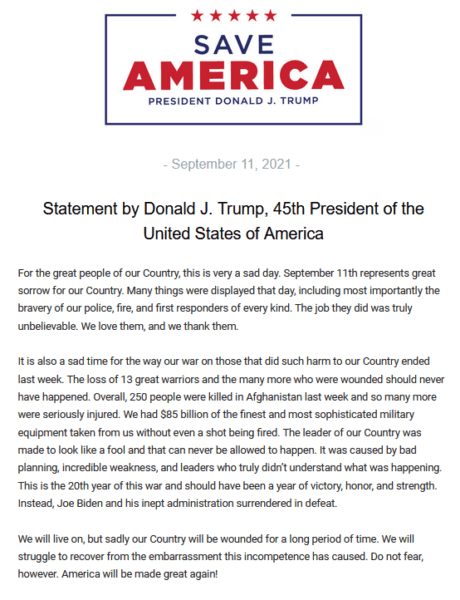