No additional explanation was given for the post, which appeared shortly after McAfee's reported "suicide" in a Spanish jail cell

The official Instagram account of the late tech entrepreneur and former presidential candidate John McAfee posted a message consisting of the black letter “Q” on a white background within minutes of National File – and subsequently, other Western media outlets – reporting on his death. No caption or explanation was provided for the post.

Instagram users were surprised on Wednesday to see that McAfee’s official account had made a post in the wake of his death in a Spanish jail cell. McAfee had been fighting extradition to the U.S. but a court had just ruled that he would be remanded over to U.S. authorities.

Though no explanation has been provided for why the letter “Q” was posted to the account, users have inferred that it is a reference to the QAnon political movement, which is a subject of feverish discussion in the corporate news media and has been used for the purposes of domestic fearmongering by federal law enforcement agencies and the Biden administration. 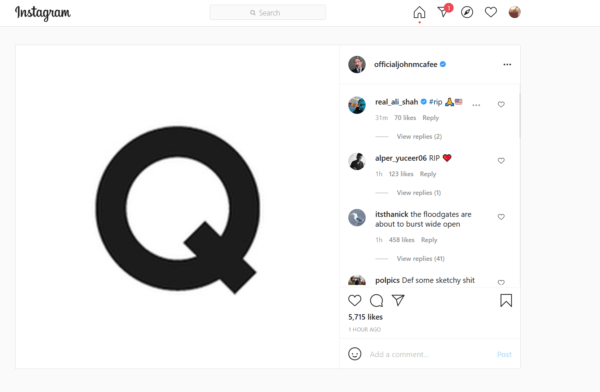 McAfee’s penultimate post before his death was a meme about Jeffrey Epstein, who also died by controversial “suicide” in a prison cell. The post caption read, “How did this get started? It’s popping up all over the place. I never said Jeffrey Epstein was murdered. I said he didn’t commit suicide. Not the same. Could be alive. Could have never existed. Maybe murdered. I dunno. I only know he didn’t commit suicide.”

As National File previously reported, McAfee had repeatedly emphasized that he had no plans to commit suicide while in jail, posting messages such as “Know that if I hang myself, a la Epstein, it will be no fault of mine,” and claiming that he had received messages from U.S. officials telling him, “We’re coming for you McAfee! We’re going to kill yourself.”