If proven true, House Republicans are saying Milley's actions would be "nothing less than outright treason."

Amid growing accusations of “treason,” House Republicans are demanding that Gen. Mark Milley be investigated over his secret calls with the Chinese Communist General Li Zuocheng, in which the Joint Chiefs of Staff Chairman reportedly offered aid and comfort to America’s greatest geopolitical adversary.

House Republicans have issued a letter, originally obtained by The Daily Caller, to Defense Secretary Lloyd Austin demanding that Gen. Mark Milley be subject to a formal AR 15-6 investigation over reports that he “blatantly disregarded the concept of civilian control of the military, and gave aid and comfort to America’s principal adversary, the Chinese Communist Party.” (READ MORE: COUP: Milley Held Secret Meeting And Told Military To Ignore Trump, Quietly Coordinated With Chinese General After 1/6 – Woodward)

The letter detailed reports that Milley had called the Communist Chinese general again on January 8, 2021 to discuss “concerns of an armed conflict,” then reportedly called the Indo-Pacific Commander, instructing him to “call off all military exercises in the South China Sea, following up by assembling senior officers and mandating that any order to launch a nuclear weapon must include GEN Milley’s involvement.” (RAND PAUL: Gen. Milley Should Be ‘Court Martialed’ If Secret Call To Chinese General Is Real) 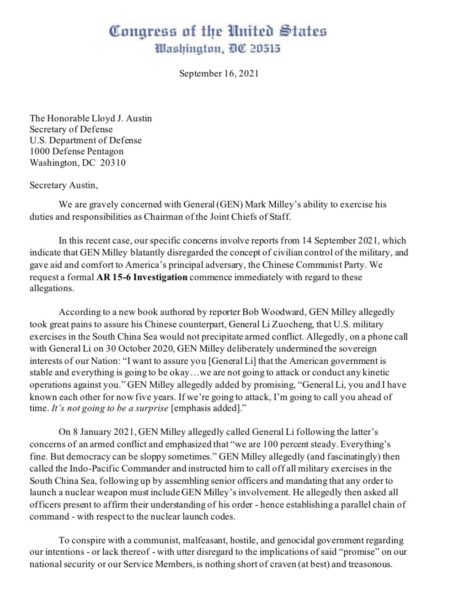 “He allegedly then asked all officers present to affirm their understanding of his order – hence establishing a parallel chain of command – with respect to the nuclear launch codes,” the letter continues. “To conspire with a communist, malfeasant, hostile, and genocidal government regarding our intentions – or lack thereof – with utter disregard to the implications of said ‘promise’ on our national security or our Service Members, is nothing short of craven (at best) and treasonous.”

The House Republicans slammed mainstream media reports painting Milley as a hero, noting that if Woodward’s claims are true it would be “nothing less than outright treason,” emphasis added by National File. (BOMBSHELL: Milley ADMITS To Secretly Calling CCP General, Promising Advanced Notice Of Attack Amid Accusations Of ‘Treason’)

The letter continues, detailing reports about Milley’s alleged Janaury 8 secret phone call with Democrat House Speaker Nancy Pelosi regarding “secure” nuclear launch codes, noting that “the General’s previous behavior on this subject indicates that the House of Representatives must learn more about the conversation(s) between GEN Milley and Speaker Pelosi, to determine whether the General attempted to make a partisan issue of National security.” 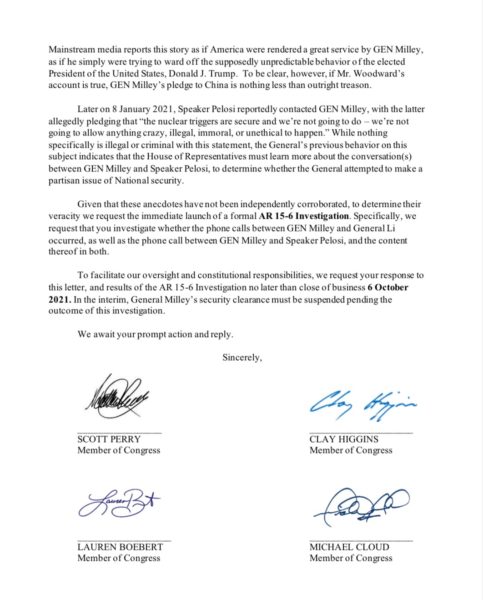 The response to the letter and the investigation results must be given to the House Republicans “no later than the close of business 6 October 2021.” They added, “in the interim, General Milley’s security clearance must be suspended pending the outcome of this investigation.”


Former Trump Administration Secretary of Defense Christopher Miller has come out and said that he “did not and would not ever authorize” General Mark Milley’s calls with the CCP. However, it has been reported he and Defense Secretary Mark Esper had “full knowledge” of the secret calls, including “about 15” other people. Esper was reportedly significantly involved in the secret CCP calls alongside Milley. “Milley was absolutely not going rogue. Esper took the initiative on this in October. Esper asked his own policy folks to backchannel the message. Milley’s message followed Esper’s,” said Washington Post columnist Josh Rogin after speaking to a senior defense official who confirmed the allegation.