The removal follows an investigative report from Laura Loomer

Disgraced former head of CISA Chris Krebs was removed from a lineup of a Florida conference hosted by a group deceptively portraying itself as a government organization, following a report from Laura Loomer.

The report from Loomer from Monday details the upcoming conference next week from the Florida Supervisors of Elections Inc. As Loomer noted, the organization, which is in reality a professional, private group containing Florida’s 67 elected Supervisors of Elections, seems to portray itself as an official government entity on its website, even going so far as to change its name only a year before the 2020 elections. This conference is not open to the public, despite the attendees being elected officials, and therefore subject to Florida’s state sunshine laws.

While the FSE’s mission statement claims to be dedicated to “conducting fair, honest, and accurate elections,” Loomer highlighted that many “disreputable characters,” like disgraced former CISA Director Chris Krebs, and representatives from Dominion Voting Systems, were attending the Florida conference. Krebs, who was fired by President Donald Trump after he claimed there was no fraud in the 2020 elections, was scheduled to speak on June 16 on the topic of “Misinformation/Disinformation and Rumor Control.”

While running CISA, Krebs started the federal government’s “Rumor Control” website, which following the 2020 election ran multiple “fact checks” on claims from American patriots who were concerned that the election had been tampered with by various actors, dismissing them outright. Krebs, who supported the impeachment of President Trump, would likely have discussed in detail this topic in particular, along with the election more broadly.

Following Loomer’s report, he was removed from the conference schedule completely, with his talk being replaced by Matt Masterson, a former cybersecurity analyst with the Department of Homeland Security. 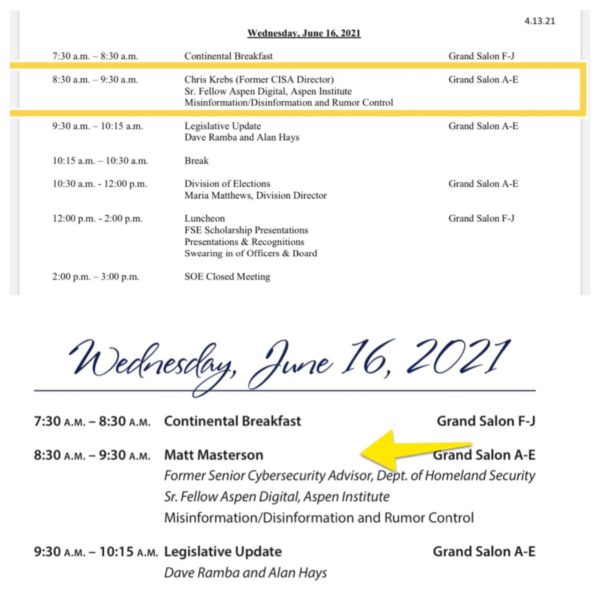 However, one speaker still present at the conference is Florida’s Secretary of State Laurel Lee, a Republican, the person responsible for conducting all elections. It is unclear whether Governor Ron DeSantis, who has been a tough proponent of election integrity, is aware of Lee’s attendance at the conference. (READ MORE: Laura Loomer Confronts Jack Dorsey Over Tech Censorship During Bitcoin Conference)

Speaking exclusively to National File, Loomer said that she was “appalled to see such nefarious actors… speaking at a conference for Florida’s elected 67 supervisors of elections.” She added that it was “of great concern that this conference has been kept in the dark from Florida citizens, when issues of voter and election integrity are top Florida voter issues”.

“I’m happy to see that Chris Krebs, who himself is a disinformation agent has officially been removed from the agenda as a speaker, following my exposé of this conference,” said Loomer. “Floridians deserve full and open transparency regarding any conference or discussions that are taking place concerning elections and election processes in their state. As a candidate for Congress in Florida’s 21st congressional district, combating voter fraud, Big Tech election interference, and improving election integrity, are my top campaign platform issues for 2022.”