Having been turned away their first time by Pawlowski, local Canadian Police return with SWAT and a court order

National File spoke to Canadian pastor Artur Pawlowski concerning the second attempt to disrupt church services in order to carry out what Pawlowski refers to as “tyrannical interference.”

Pawlowski has refused to discontinue services or aid to local  homeless throughout the entire duration of these COVID19 lockdowns, and has accumulated nearly 30 tickets for these violations.

Pawlowski believes the local police will continue to try to make an example of him due to his activism that spans over the last decade. This was made clear to him when the police returned to his church for a second time.

This time they brought 10 officers and were accompanied by a SWAT team.

Pawlowski has made it clear to these officers on both occasions that he will not permit the invasion on God’s House during a holy service, regardless of a court order.

Having expressed he has no issue with them coming into he church, Pawlowski explains that as long as there is no interruption of worship they are welcome to come perform whatever checks they require to allow him to remain open.

An unidentified woman working side by side with these law enforcement officials showed up despite the implications of Canadian Criminal Code in order to serve the preacher, Pawlowski, with a court order. This court order essential gives the Police and SWAT permissions to ignore Criminal Code (R.S.C., 1985, c. C-46) which clearly states:

It can be concluded that the purpose of this court order is to circumvent any criminal charges that would normally be enforced for interrupting or preventing a clergyman from conducting religious or spiritual services. As long as you get the right person in the government to back you, the law is neglected. 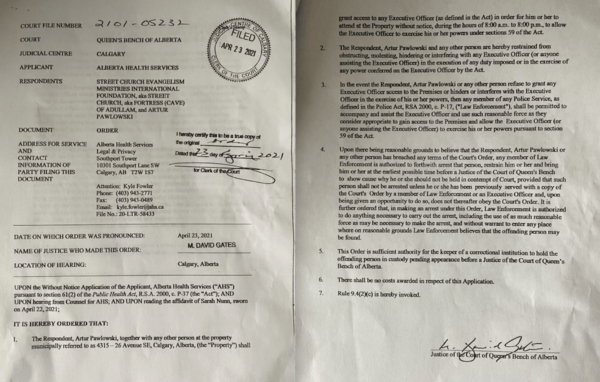 Pawlowski will not let the police “bully” him into interrupting worship . Again Pawlowski made a video of the encounter where he calls out their illegal practices in order to scare the church into complacency.

As a  well known figure to the Canadian government, Pawlowski became known as the first preacher to be arrested for reading the Bible in a public space to the local homeless in 2006.

For the last 16 years Pawlowski has been sounding alarms that the same tyranny he escaped Poland to flee this same kind of governmental tyranny.

Often written off as a conspiracy theorist, Pawlowski now says “the people who use to laugh and call me names are not laughing anymore. The threat is real to them now.”

“People realize it’s not funny after a year of being treated like like a slave suddenly people are realizing that that I was right, and now  so my message is clear, we got a rise up in a peaceful non-compliance. If the government tells you to wear a mask, you don’t, if they tell you social distance, you don’t when they tell me you don’t go somewhere, you go to the very planes they were telling you, not to go, but go in large numbers.”

Pawlowski anticipates the police will be back with more force next time.