Several politicians and celebrities had their Twitter account hacked by Bitcoin scammers on Wednesday afternoon, with the prominent Twitter users posting identical messages instructing users to send the equivalent of $1,000 in the digital currency to an address based on the promise that the celebrity would send back $2,000 in an act of generosity.

Verified Twitter users ranging from politicians to celebrities to business leaders were hacked on Wednesday, with several high profile accounts sharing identical links asking their followers to send $1,000 in Bitcoin to an unknown wallet, promising that the hacked celebrities would send back $2,000 as an act of philanthropy.

The hack seems to have started with Tesla and SpaceX founder Elon Musk, who had his account hijacked to post a message claiming the business tycoon was doubling all amounts of Bitcoin sent to him. 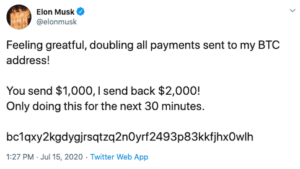 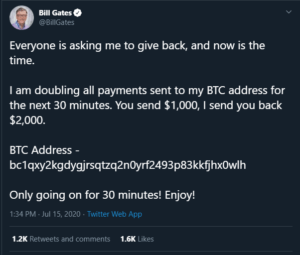 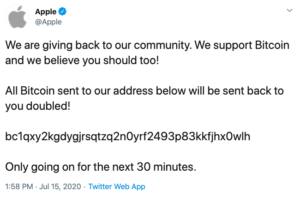 Kanye West and the popular Cash App both had their accounts hacked by the scammers, with the message posted to their Twitter accounts as well. 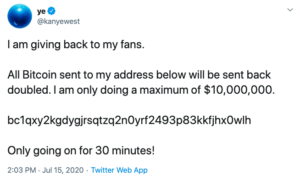 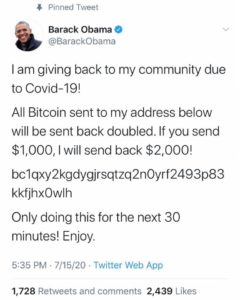 WARNING: @Gemini's twitter account, along with a number of other crypto twitter accounts, has been hacked. This has resulted in @Gemini, @Coinbase, @Binance, and @Coindesk, tweeting about a scam partnership with CryptoForHealth. DO NOT CLICK THE LINK! These tweets are SCAMS.

Users established that the Bitcoin address posted by the hacked Twitter accounts is indeed real, “and there are transactions happening,” meaning people are sending the account Bitcoin.

However, tech reporter Ryan Mac notes that “It’s unclear if these transactions are legit,” and “Scammers often seed their own scams to give them the appearance of authenticity.”

It's an actual wallet address and there are transactions happening. It's unclear if these transactions are legit. Scammers often seed their own scams to give them the appearance of authenticity. https://t.co/GUHEDaKNxu pic.twitter.com/xfhl3817xr

Twitter acknowledged the hack some time after it began, telling users they are “aware of a security incident” and are “investigating and taking steps to fix it.”

The big tech platform also advised users that they “may be unable to Tweet or reset your password while we review and address this incident.”

You may be unable to Tweet or reset your password while we review and address this incident.

This is a breaking news story and may be updated as additional information becomes available.