A popular black separatist Instagram page called “Independent Black Businesses” became embroiled in controversy this week after black followers learned that the account – which has routinely solicited PayPal and Patreon donations – is actually not managed by a black person, but a middle-aged white female from Brighton and Hove, U.K.

“Independent Black Businesses” was created this year and routinely posts photos of “black-owned businesses” accompanied by emojis and phraseology associated with black media activists, while soliciting PayPal and Patreon donations from followers. 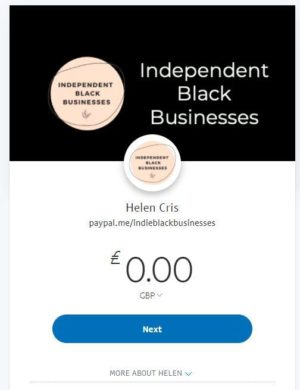 On November 23, the page made an out-of-character post that revealed the page’s owner is actually a white female from the U.K. named “Helen.”

“It has been brought to my attention recently that there has been some confusion over the face behind @independentblackbusinesses so I wanted to be open and clarify that I, (Helen) am White,” the account stated.

The account also apologized for using non-white emoticons after realizing that “using emoticons that differ to your own skin colour can be a form of digital blackface and digital cultural appropriation.”

When the post first began to receive attention, the top comments showcased feelings of anger and betrayal by black nationalists who had been led to believe that the page was managed by a woke black woman.

“So you’ve had this page for almost six months, you’ve posted over 100 times and you never thought it was important to highlight that you’re a white woman” one comment read, while another stated, “For days, I was speaking openly with you about a difficult issue that was affecting me as a Black person. At no point during our messages did you find an opportunity to say ‘I am actually white and I stand with you’.”

Over the past few days, however, several of those comments have mysteriously disappeared and been replaced with messages of support that have been been liked by the owner of “Independent Black Businesses.”

When the page tried to resume posting its usual content, however, the comments section was flooded with negative messages.

One user noted, “You have responded to many of the supportive and congratulatory comments on your last post but have failed to reply to many of the comments calling your actions into question and asking for accountability.”

Independent Black Businesses has not made any further posts this week, and seemingly has not replied to any of the angry comments from jilted fans.