Deonte “Taz” Kelly, 23, of the 200 block of E. Penn St. in Philadelphia, Pennsylvania, has been charged in the double homicide of Pottsgrove High School students Brandon Bacote-Byer, 18, and Skyler Fox, 17, in what police believe was a drug deal which ended in catastrophe.

Fox and Bacote-Byer were killed near Fourth and Johnson street in Pottsboro, Pennsylvania on Monday night at 11:33PM, shot to death next to Fox’s gold-colored 1992 Mercedes Benz. Ten shell casings, a cartridge, and a Brazilian-made, Taurus G3 9mm handgun with a sawed-off serial number were recovered by law enforcement at the scene.

Deonte "Taz" Kelly, 23, of the 200 block of E. Penn St. in Philadelphia, Pennsylvania, has been charged in the double homicide of Pottsgrove High School students Brandon Bacote-Byer, 18, and Skyler Fox, 17, in what police believe was a drug deal that ended in disaster. pic.twitter.com/QoQ42jjRhr

Authorities stated that Kelly has eight additional outstanding warrants for his arrest, as well as a bench warrant for aggravated assault, terroristic threats, and robbery. He has also been charged with strangulation, fleeing and eluding, and illegal possession of a firearm.

Kelly is wanted by law enforcement in Pottstown, Norristown, North Coventry Township in Chester County, as well as the Philadelphia State Patrol.

A witness told law authorities that he/she observed Fox as he crawled away from his car with a black backpack on his shoulder, however, minutes later, the witness said the backpack was gone and Fox’s body was still.

The autopsies of the young men’s bodies found that Fox was shot three times in the back, and had two exit wounds to the front of his torso, while Bacote-Bryer was shot in the head twice, once in the front and once in the back.

Kelly is a Black male, with black hair, and brown eyes. He stands 6-feet tall and weighs approximately 180 pounds.

The investigation conducted by the Montgomery County Detective Bureau and Pottsdown police that followed the murders found that Dominic Carboni, 17, of Schwenksville, Pennsylvania, is to be charged as a co-defendant in the case and that he had met with Fox to buy marijuana.

Prior to the meeting, Carboni picked up Kelly, who is now on the lam, and drove to him to the eventual murder location. Text records showed that at 11:45 p.m. Carboni deleted his text message history with Fox. 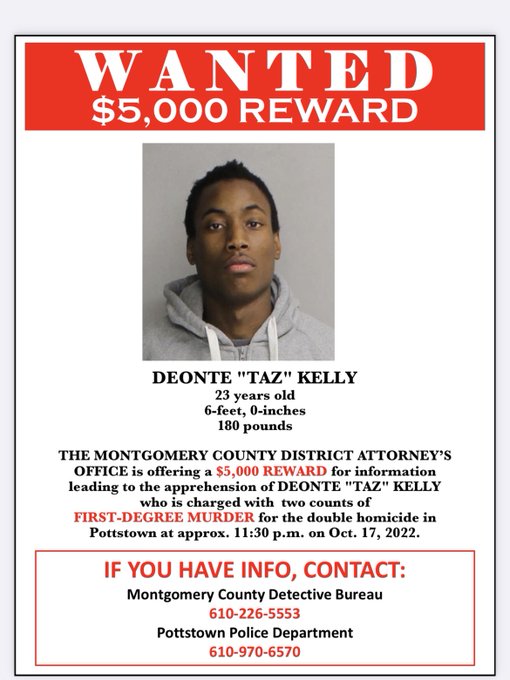 Carboni was taken into custody on October 20th and is enrolled in classes at Montgomery County College’s Blue Bell campus.

He was arraigned on Thursday before Magisterial District Judge Patricia A. Zaffarano and remanded to the Montgomery County Juvenile Detention Center without bail, due to the first-degree murder charge. Although he detained in a juvenile center, the DA has yet to state whether or not Carboni will be tried as an adult.

The Montgomery County District Attorney’s Office is offering a reward of $5,000 for information that leads to the capture of Deonte Kelly. Police stated that he is to be considered armed and dangerous, and not to approach him but to call 911 immediately.