Ayyadurai’s findings, according to the 45th President, provide further proof the 2020 election was fraudulent. President Trump then said that a new election should be declared, or else the state should decertify its 2020 presidential election and declare him the victor.

The analysis “means the election was Rigged and Stolen from the Republican Party in 2020, and in particular, its Presidential Candidate,” wrote President Trump. “This analysis, derived from publicly available election data, shows staggering anomalies and fictitious votes in Pima County’s mail-in returns, making it clear they stuffed the ballot box (in some precincts with more ballots than were ever sent!).”

“Your favorite Republican candidate was steadily outperforming the Republican share of mail-in ballots by 3%,” wrote President Trump, “while Joe Biden was underperforming Democrats by 3%.” He added, “But when mail-in ballots started pouring in way higher than normal (at over 87%), this trend flipped. In other words, when it was clear Trump was going to win, that’s when they swung into action. As more mail-in ballots poured in and increased by 1%, Trump’s performance decreased by 1%, while Biden’s increased.”

“Turnout rates of 99% and 100% is what you get in a Third World Country, and that’s what we’re becoming (look at crime, the Border, Afghanistan, food prices, energy prices, and the empty store shelves, etc.), unless this is fixed immediately!” President Trump wrote. The precincts above 92% mail-in return rate represented 264,000 votes. If just 2% are fraudulent, meaning Trump votes went to Biden, that would be enough to change the so-called margin in Arizona of 10,457 votes.”

The 45th President then noted that the Department of Justice has had this information since the election occurred. Since Joe Biden assumed the White House, rumors and accounts of former Attorney General Bill Barr repeatedly sparring with President Trump and refusing to act on his orders have become commonplace.

“The Department of Justice has had this information since the November 2020 Election, and has done nothing about it,” wrote President Trump. “The Pima County GOP should start a canvass of Republican voters, in order to identify and remove the obvious fictitious voters from the system.”

He noted that the results of Ayyadurai’s analysis of Pima County and the results of the Arizona Audit were “also determinative, and more than the margin.” President Trump then called for another election, or immediate decertification: “Either a new Election should immediately take place or the past Election should be decertified and the Republican candidate declared the winner,” wrote President Trump. 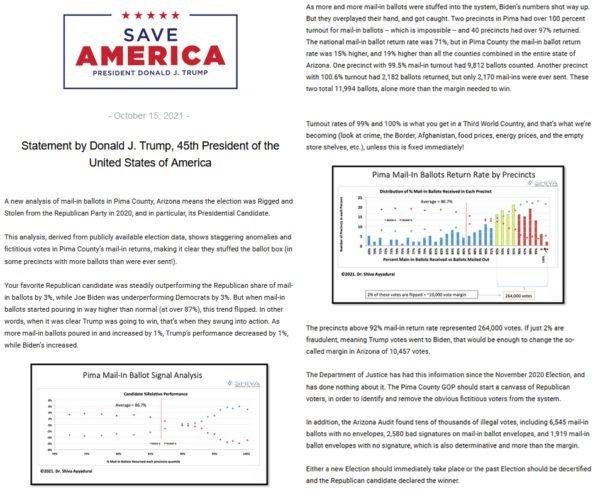 Arizona state Rep. Mark Finchem, who is now running to become the Arizona’s next Secretary of State, has repeatedly called for Pima County to be audited since the Arizona Audit results were released.

“Audit Pima County,” Finchem wrote on Twitter with an excerpt of Ayyadurai’s presentation. Finchem is urging Americans to sign a petition calling for the audit.