President Donald Trump and his supporters are emboldened after revelations that many thousands of counted votes are tainted in Maricopa County, Arizona as the Republican state Senate’s forensic audit continues. The Trump Team responded with vindication when the audit found that 11,326 people in the county who voted in the November 3 election were NOT on the voter rolls on November 7, but were added to the voter rolls by December 4. This number is higher than Joe Biden’s supposed statewide “lead” in Arizona of 10,457 votes. Additionally, more than 74,000 mail-in ballots were counted in the county even though there is no recorded evidence of the ballots being sent to the “voters” in the first place — and Maricopa County withheld all photographic evidence of the mail-in ballot envelopes from the Republican audit team. Another round of subpoenas is expected, as state Senator Wendy Rogers calls for the Republican-controlled Arizona legislature to “recall” Joe Biden’s electors in the state.

Cyber Ninjas CEO Doug Logan said at a hearing before Arizona state senators Thursday that his election audit found more than 74,000 mail-in ballots that were counted in Maricopa County with no record of them being sent to the voters, and that the standard of verification for mail-in ballots dropped down to zero during the counting process. Logan is demanding the full library of mail-in ballot images from Maricopa County, which the county has not provided to him. Biden’s official lead in Arizona stands at only 10,457 votes.

“We have 74,243 mail-in ballots where there is no clear record of them being sent,” Doug Logan said. “And so we have 74,000 where we have them came back from individuals where we don’t have a clear indication that they were ever sent out to them.”

BOMBSHELL: Arizona Audit experts say that there were 74,000 mail in ballots received with no record of them being sent out. pic.twitter.com/0LMel5Yj2l

“The tally sheets out of Fulton County look like they were written for Saddam Hussein,” Trump spokeswoman Liz Harrington stated, referring to Fulton County, Georgia, which is also firmly in the President’s sights in addition to Arizona.

Here is President DJT statement on Arizona and Georgia, which the President released Friday night: 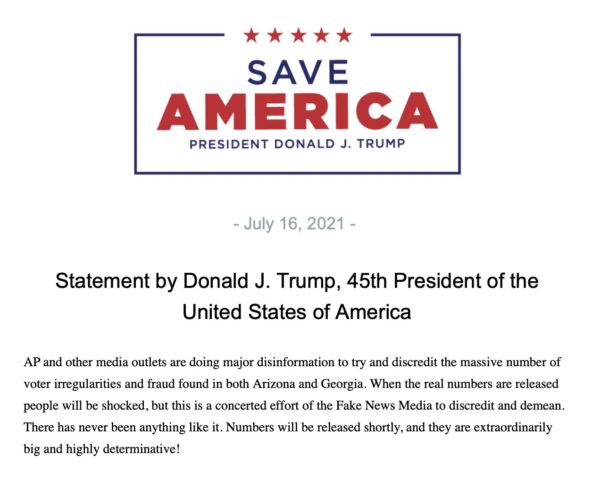 more affidavits going out in Wisconsin. The People are demanding a forensic audit by constitutional right @wisgop pic.twitter.com/Nnmdd6VZcw