Antifa Activist Brags About Suing His Own Grandma Over Rent

Antifa Activist Brags About Suing His Own Grandma Over Rent

An Antifa activist went viral after bragging on social media that he was suing his landlord for demanding rent after tracking his coronavirus stimulus check.

However, the young left-wing activist failed to mention, before going viral, that his landlord was also his very own grandmother.

According to The District Herald, Austin Goodrich, 22, gained social media fame after submitting a complaint stating that “feeling overwhelmingly violated and vulnerable.”

Prior to filing the complaint, Goodrich had requested for post-due and due fees to be waived during the coronavirus global pandemic, until his lease ran out at the end of June–even promising to leave a good review. Since his grandmother and landlord failed to response, the young Portlander decided to take to social media to chase clout over his complaint.

Goodrich’s grandmother, apart from being his landlord, is also the young activist’s tax preparer. A few hours after her grandson received his stimulus check, she asked him whether he would be paying back some rent with the windfall. 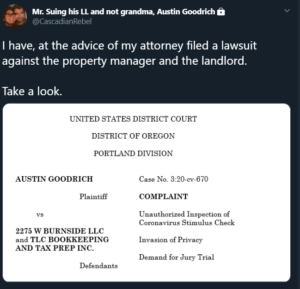 Part of the complaint specifies that Goodrich’s grandmother had used his social security number to track whether the stimulus check had been received, something that the IRS “Get My Payment,” even though the IRS warns that “unauthorized use of this system is prohibited and subject to criminal and civil penalties.”

Goodrich, who was laid off from his job as a security guard, told Oregon Live, according to local outlet KGW, that he wanted to bring the easily exploitable IRS website to the public’s attention. 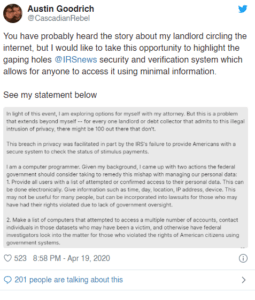 In the email communication, he wrote, “I initially remained anonymous on the issue for awhile but decided to use this opportunity to speak out on behalf of tenants that suffer abuses from their landlords/property managers that this is the time to put your foot down and demand fair treatment of your rights.”

“I also wanted to bring attention to the IRS’ vulnerabilities that would allow anyone with access to Social Security numbers to gain illegal access to their computer systems.”