With only 10.3% adjudication, Trump wins the election by 40 votes.

Following an examination of a 100 vote sample conducted by the Arizona GOP, analysis by National File has concluded Biden’s lead in the state could drop down to 0.19% of the total votes cast.

On Wednesday, Arizona GOP Chair Dr Kelli Ward revealed the results of the examination of a 100 vote sample that they had conducted, after being granted access to the ballots by Judge Randall Warner. The votes examined in this batch were reduplicated ballots, in that they are a copy made from an original vote when it cannot be tabulated. This copying is meant to be done by a bipartisan team of county workers, which Ward alleges did not happen in many cases.

In the 100 vote batch, two votes were discovered that were of concern. Arizona GOP lawyer Jack Wilenchik wrote in a court filing that one original ballot contained “was clearly a vote for Trump,” but the “duplicate ballot switched the vote to Biden,” while a second Trump vote was completely discarded, due to the duplicate ballot also including a “blank” vote for a write-in presidential candidate.

In today's update, Chairwoman @kelliwardaz announces the findings from our investigation of 100 duplicate ballots, in which TWO votes were discovered to have been altered and removed from President @realDonaldTrump's total. pic.twitter.com/6Dg9zd2XGd

“Thank goodness that Judge Warner said he wanted to err on the side of transparency and let us look at these,” Ward said in a video released to Twitter. “Those media propagandists who say there is no evidence of fraud can now shut up.”

“It looks like this election has attempted to have been stolen from President Trump,” Ward added, noting that the attorneys for Democrat Secretary of State Katie Hobbs and the Biden electors wanted the results of the examination to be kept secret. “This shows us that these Democrats are anti-transparency, and potentially covering up fraud,” Ward continued. “We will not stop looking until all of this is brought to light.”

National File has undergone an exclusive and extensive mathematical analysis to discover what the total vote count, and therefore Biden’s Arizona lead, may look like if the findings of this sample size can be extrapolated to state level. It is unknown how many ballots required duplication, as the statewide canvass did not specify this. National File is therefore using the pre-election estimate of Maricopa County, which suggested they may see around a 2-4% reduplication rate.

Before entering the analysis, it is important to note that we will be using the total votes cast in the state for all candidates as our starting number, (3,397,388), rather than the total votes cast for Trump and Biden together, as we are assuming that the 100 vote sample was a fair sample, and was therefore likely to include votes for other candidates. The initial vote sample returned a rate of 2% of the votes in the sample that should have been cast for Trump that were not. 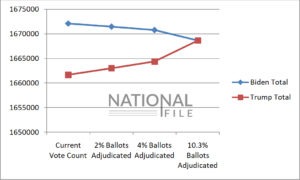 There are also two types of vote change happening here. Biden currently leads Trump by 10,457 votes. The vote not counted for President Trump would remove one vote from him, and the vote that was initially given to Biden, but returned from Trump, would reduce the total vote difference by two, as it removes one away from Biden, and giving one more to Trump. We will therefore be multiplying the total error votes in our calculation by 1.5 to correct for this. This is equivalent to a 3% change.

Using the 2% lower bound reduplication rate from Maricopa County, 1,359 ballots would have been counted in error. Assuming the split between Trump votes purely lost and Trump votes given to Biden remained the same in the sample, then Biden’s lead would drop down by 2,038 votes to 8,419.

When using the 4% upper bound reduplication rate, 2,718 ballots would have been cast in error. Assuming the same split as before, this would reduce Biden’s lead in Arizona down by 4,077 votes to 6,380. This lead is 0.19% of all total votes cast in Arizona.

However, it is reasonable to assume the reduplication rate could be far higher than the pre-election estimates from Maricopa. During the election integrity hearing in Arizona on Monday, Trump lawyer Rudy Giuliani and expert witness Colonel Phil Waldron referred to a witness who saw all day “election officials constantly pressing the green button [on the voting machine] when somebody was voting.”

This green button in question is the one that is pressed when an error ballot is needed to be created, and the votes would then be “put into a batch file that could be adjudicated.” To be “put into a batch file” is simply another term for being electronically reduplicated. If this button was being pressed “all day,” all across the state, then it is not unreasonable to suggest a higher reduplication rate than expected.

Colonel Waldron linked the reduplication of ballots to the SharpieGate controversy, where Republican leaning voters were instructed to use Sharpies, not ballpoint pens when voting. “The idea is that [there would be] bleedthrough on the ballot, [and therefore] the scanners would cause an error ballot,” Waldron said.

Arizona Representative Dr. Paul Gosar extrapolated the 3% vote change discovered and reasonably hypothesized this to be the rate of fraud seen throughout the state for Biden – not an unreasonable assumption when the votes discovered were so apparently blatantly changed. “If the 3% fraud rate remains on a larger sample, Trump easily wins Arizona,” Dr. Gosar tweeted.

Maricopa County on Wednesday offered a further 2,500 additional duplicated ballots for the Arizona GOP to look through. This further analysis will likely change the percentages originally discovered from what Ward admitted was a “very, very small” initial sample.

The Arizona GOP announced that it will be posting another “big” update on Thursday, according to an announcement posted on their Twitter page.

President Trump seemed to reference a large number of voting irregularities, potentially tied to SharpieGate, that could have led to a larger than usual number of adjudicated ballots.