Former Japanese Prime Minister Shinzo Abe is dead after he was shot in the back during a speech in Western Japan. 45th President Trump, who worked closely with Abe during his presidency, called the news “devastating,” and referred to the former Japanese PM as a “true friend.”

Shinzo Abe was both Japan’s youngest elected and longest-serving prime minister, leading America’s close Pacific ally in two stints – one from 2006 to 2007 and again from 2012 to 2020 when he stepped down from his office over health concerns. A conservative and frequent target of Japan’s political left, Abe worked closely with President Trump during their concurrent times in office and was seen as a key figure in the strategic fight against communist China.

When he was shot, Abe was still serving as a member of Japan’s House of Representatives and still very much active in the world of Japanese politics.

Mobile phone videos captured the moment Shinzo Abe collapsed after being shot in the Japanese city of Nara. Bystanders and aides could be seen rushing to help the wounded PM, who was bleeding from his chest.

Police have arrested Tetsuya Yamagami, 42, and named him as the gunman. Yamagami appears to have shot Abe with a sawed-off shotgun.

Yasuhara confirmed that Abe was unconscious and not showing any vital signs.

45th President Trump mourned the loss of his Japanese counterpart in posts to his page on the Truth Social network, calling the news of his shooting “absolutely devastating.”

“Absolutely devastating news that former Prime Minister Shinzo Abe of Japan, a truly great man and leader, has been shot,” Trump posted to Truth after news of the shooting broke. “He was a true friend of mine and, much more importantly, America,” Trump went on to write, calling the loss of Abe a “tremendous blow.” 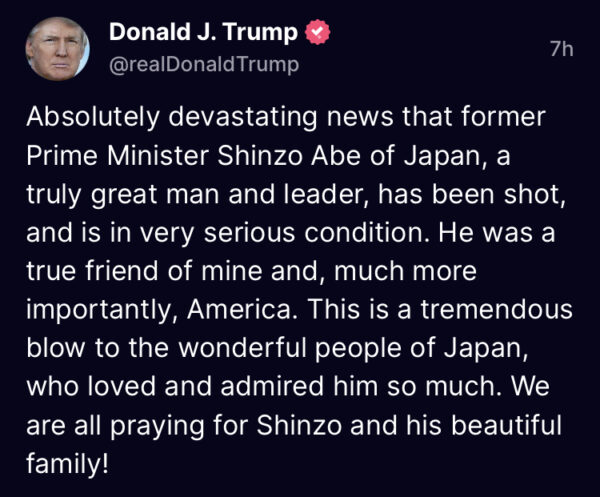 “Really BAD NEWS FOR THE WORLD!” wrote Trump after Abe’s death was officially announced. “Former Japanese Prime Minister Shinzo Abe is dead. He was assassinated. His killer was captured and will hopefully be dealt with swiftly and harshly,” the 45th President went on in posting to Truth Social, calling Abe “a man who loved and cherished his magnificent country.” 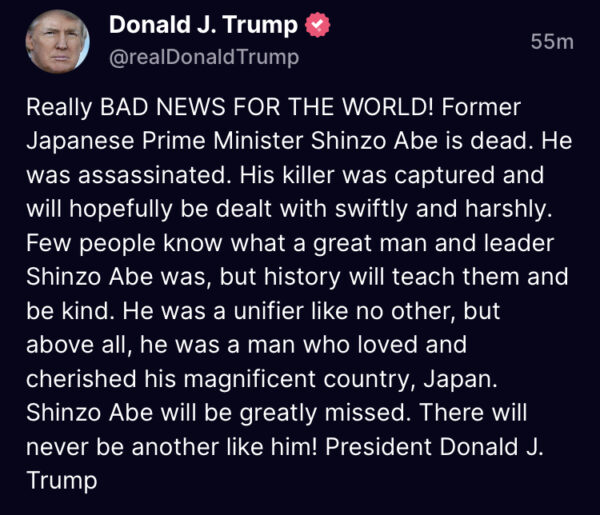