In a recent email to voters, GOP State Senator Jen Kiggans tried to garner support for her Congressional run by blasting Democrats and their handling of Virginia’s education system, despite voting with the radical left for the very legislation that kicked off the state’s school crisis, opening girls’ restrooms up to men and forcing school districts to adopt radical, pro-trans policies against the demands of parents.

In the email sent to voters, Jen Kiggans, who is running an establishment-backed campaign for the 2nd District’s GOP nomination to Congress, tried to address the “huge issue” of education, pitting herself against Democrats she says are waging a “war on parents,” like gubernatorial nominee Terry McAuliffe.

In the aftermath of girls’ bathroom rapes by a “gender-fluid” male student, as well as the introduction of critical race and LGBT curriculum in schools, education has become a hotly-contested issue in Virginia politics. “We need a leader who will stand up for parents and children,” Kiggans wrote.

Despite the tough talk, Kiggans neglected to mention her vote in favor of the Virginia Values Act, an expansive piece of far-left legislation that effectively rewrote the Virginia Human Rights Act in the image of the LGBT lobby.

The act was cited by the Virginia Department of Education in forcing school districts to adopt radical “trans-affirming” policies, govern pronoun usage, and open girls’ restrooms up to men – like the those in Loudoun County, where a “gender-fluid” male who donned a skirt and used the girls’ restroom has been convicted of raping a female student and awaits trial in another case where he is accused of raping another female student.

Trending:
'Bite Your Tongue!': Elizabeth Warren Lashes Out At CBS Panel When They Bring Up Biden's Abysmal Approval Ratings

Kiggans also attempted to address COVID-19 and its impact on public education in the email, writing that she opposes school mask mandates but making no mention of COVID vaccine mandates or her plans to support or oppose them going forward, especially with regards to schoolchildren, though her voting record could indicate where she stands.

Earlier this year, when conservative State Senator Amanda Chase introduced legislation that would have blocked Virginia municipalities from forcing their employees to accept the COVID-19 vaccine or lose their jobs, Kiggans, who so often touts her job experience as a nurse practitioner on the campaign trail, abstained from the vote.

With the help of her abstention, the measure was defeated by Democrats, leaving employees unprotected from the potentially politically-motivated whims of local leaders.

Senator Chase blasted Kiggans’ abstention from the vaccine mandate vote at a rally in support of Jarome Bell several weeks ago, telling supporters of Bell that “we don’t need Republicans walking away from issues that are important to the people.”

Kiggans will have to face off against Bell for the 2nd District’s GOP nomination to Congress, and the staunch America First conservative has taken her to the woodshed over her support for establishment politicians and left-wing legislation.

Bell currently boasts the endorsement of General Michael Flynn, as well as border hawk Congressman Paul Gosar and Arizona audit champion Wendy Rogers. Bell has vowed to support a Freedom Caucus candidate for Speaker of the House when elected, in stark contrast to Kiggans, who says she would back establishment GOPer and current House Minority Leader Kevin McCarthy for the post. 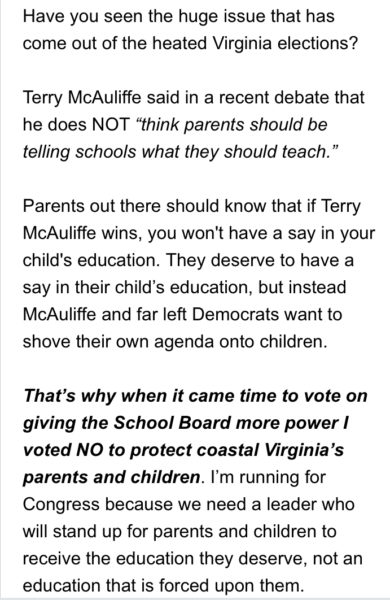 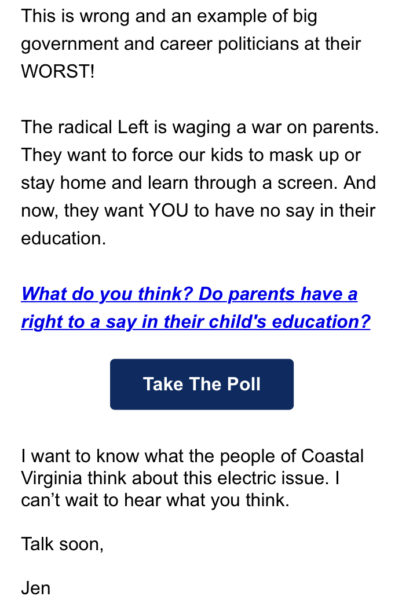